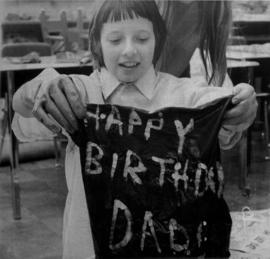 This photograph shows James McQueen student Lois Benham holding a birthday present for her father that she made in art class.

Item is a framed print from the Douglas R. Greer Collection entitled: "Hatching Caddis," 1996. Includes the following caption: "There are more than 2000 species of Caddisflies, (some species are known as sedge-flies), comprising an ever-present fertility for fly-casters on Ontario trout streams such as the Ganaraska and the Grand. Caddisflies represent an astonishing 50 per cent of the Grand River's invertebrates, and unlike Ontario's Mayflies - which live for only a day - the Caddisfly's productive life-cycle can last for a month or more."

File consists of the plans for the Port Hope & District Hospital campaign, 1958-1963. It includes: Official Opening Program, 1965; brochures and a magazine article. Also, details related to the building of a new modern hospital, requiring $450,000. The hospital was completed in 1964 and the official opening was held in 1965.

Item is a hand-painted movie poster created by the Capitol Theatre, 1942. It features information about the showing of "Her Cardboard Lover" on Monday and Tuesday September 28-29th, 1942. Additional text on the poster includes: 2nd Feature "We Go Fast" "With Speed Cuties and Cops" and "Capitol News." 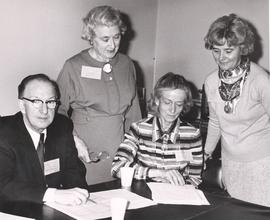 "How To Put On An Event" Well Attended

This photograph shows representatives from many of Guelph's organizations taking part in the Guelph Arts Council's workshop on planning and managing a public event. Seen here are Joe Norman, Edith Kidd, Peggy Reading, and Joanna Gould.

"I Married an Angel" Movie Poster

Item is a production company movie poster for "I Married an Angel" used by the Capitol Theatre, 1942.

"I have had a good look at Carleton"

Gen. Douglas MacArthur tells the Filipino people in a broadcast made a few hours after he and an American army of 250,000 men returned to the Philippines to avenge Corregidor and Bataan. He called upon the Filipinos to "Rise and Strike" the Japanese. At left, drinking out of a canteen, is Philippine President Sergio Obmena.

"I'm a Fan of the Capitol Theatre"

Item is a paper fan with oriental scenes sponsored by Barney Mills Plumbing and Ling Brothers Plumbing and Heating reads "I'm a fan of the Capitol Theatre." 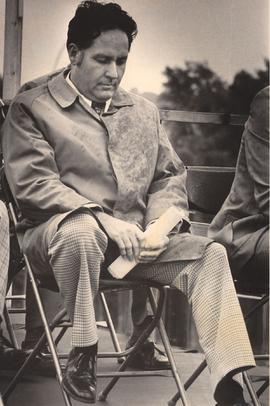 This photograph shows City of Guelph Mayor Norm Jary taking a moment to gather himself after his scheduled guest, Premier William Davis, did not show up for a scheduled press-conference and meeting and instead sent Natural Resources Minister Leo Bernier.

"In My Garden" Book

Item is a copy of "In My Garden" by Jean Kilby Rorison, part of the Ryerson Poetry Chap-Books. Also included are 20 additional pages believed to be in Jean Kilby Rorison's hand-writing with poems. Some typed pages. Also newspaper clippings with her poems. Note included with the holding indicates the pieces were collected before 1954.

Part of Gay and Lesbian Alliance at Stanford fonds

"In the Shadows of the Sea: the Destruction and Recovery of Zeeland, the Netherlands, 1940-1948"" by Kirk W. Goodlet"

A PhD Thesis on the wartime experiences of the Dutch province of Zeeland during the Second World War by Kirk Goodlet. 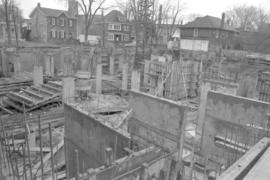 "In" Place To Live

This photograph shows apartments being built on Yarmouth Street in downtown Guelph. 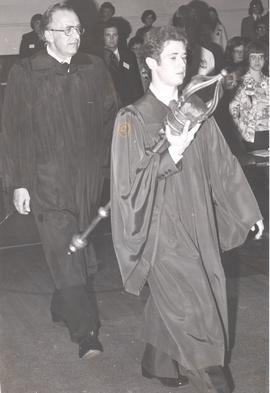 "Involvement" For Success, OYP Is Told

Item is a painting by Canadian actor and artist Robert Imbert Orchard (1909-1991). Oil, unframed painting. Written on verso: "Painted by Robert Imbert Orchard when a student in J. W. Beatty's class at Corbett's Mill, Port Hope. The "Julia B. Merrill" ship painted in Port Hope harbour 1928. She was afterwards burnt at Sunnyside August 1931 to amuse the public. One of the last lake schooners had been a rum runner, then was carrying coal." Orchard would have been 19 years of age when he painted this. He had returned to Port Hope for a visit in the summer of 1928, which coincided with the fire of 1928 at Trinity College School.

Item is a copy print of a photograph of members of K Company, A.S.C. University of Toronto, Canadian Officers Training Corps. The photograph was taken at Niagara Camp in June 1941. William G.C. Howland is seated in the front row, seventh from right.