Item is an ink blotter from the 'F.G. Cotter & Co.' company from Port Hope.

Owners and Tenants of 29-33 Walton Street

File consists of typed notes on the owners and tenants of 29-33 Walton Street, Port Hope (Gillett Paterson Block), from 1845-1901.

Fonds consists records relating to teaching work in Japan from 1960s until Daphne's retirement in 1994.

Fonds consist of predominantly sermons of Rev. Lloyd Harold Hylton, as well as a copy of his unpublished manuscript on the Revelations of John.

Collection consists of sermons and some miscellaneous correspondences and notes. 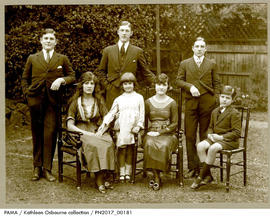 Fonds consists of records created or collected by the Walker family of Brampton, including Harry Walker who ran a shoe store at 17 Main Street South. Fonds includes an early photograph of Harry Walker inside the store which was in operation during...

The fonds includes textual and audio documents. It contains the first versions of some of the poems found in Lizotte’s two books, unpublished poems, narratives and remarks about plants that the author was fond of. Most of the audio material has be...

The fonds contains textual, photographic and audio documents relating to Jean-Roch Pelletier’s personal life and religious career starting with his collegial studies in the Bas-Saint-Laurent region. The fonds also retraces the fifty years he spent...

The collection contains newspaper clippings mostly from The Northland Post/The Cochrane Times and l’Ours Noir, two Cochrane newspapers. There are also a few clippings from other northern Ontario newspapers. They are related to members of the Lamar...