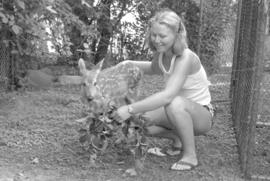 "Boys' Business: A Boy's Adventures with Birds and Beasts"

Item is an edition of "Boys' Business: A Boy's Adventures with Birds and Beasts," 2015. The original manuscript was written by Charles Haultain and his mother, c1910. It was discovered, and published, by his daughter, Barbara in 2015. The book contains the musings of a young boy while hunting, fishing, and enjoying the life of a young naturalist in the area surround Port Hope, and Hope Township. It also includes sketches and watercolours created by Charles Haultain.

File consists of a letter from Avtar Singh Brar, the president of the Ontario Council of Sikhs; notes on the Sikhs and the kirpan; recognition of the 5 K's (the Sikh religious emblems) by Government Agencies and Parliamentary Committees; and religious exemptions made for Sikhs abroad to ensure that they can follow the 5 K's.

Brig. Gen. Hines displays the huge buck he bagged, as the animal lies slung across the hood of a Jeep. Left to Right: Gen. Hines, Col. Koncherov, and Torris A. Lyche. Hines and Lyche were invited on a hunting trip to Karin Hall, previously Hermann Goering's, now in Russian occupied territory. 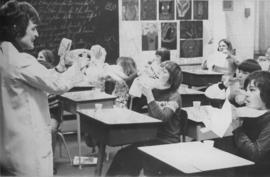 File consists of reports made by the Canadian Human Rights Reporters about the complaint made by Harbhajan Singh Pandori and the Ontario Human Rights Commission about the Dress and Grooming Codes within the Peel Board of Education, which forbid the "wearing of kirpans to school".

File consists of a handwritten chart.

File consists of a handwritten chart.

"Casuality" on Record Raid over Germany

A sheet of solid flame streams from the wing of a B-17 Flying Fortress of the U.S. Eighth Air Force as it banks our of formation and heads for snow-covered Germany below. Photo taken during the large daylight assault December 24th, on Nazi communications systems.

Part of Institute of Community Studies and Oral History fonds

File contains text from the anniversary website, a bibliography, and a DVD containing photographs, documents, and video recordings for the website.

Series consists of three (3) publications of "Central Ontario Lakeshore Sports Look." Publications are for Port Hope and Cobourg and cost $0.85 each. They are for week #1 (9 Feb 1990), week #2 (23 Feb 1990) and week #3 (9 Mar 1990). All three publications include; tsn tv listings, local sports information, stats, schedules and OHL information. In week #3, there is also information about spring training and a Jays and Chiefs schedule.

Item is a full-text typewritten address given by George Gale at a meeting of the Old Boys Association of University of Toronto School on the subject of morality and criminal law. The item has been annotated by Gale.

Item is a full-text typewritten address given by George Gale to a meeting of the Alberta Law Society on the subject of changes in law. The item is annotated in parts by Gale.

Item is a full-text typewritten address given by George Gale to a meeting of members of the Nova Scotia Bar on the subject of changes in law. The item has been annotated by Gale.

Item is a full-text typewritten address given by George Gale at the mid-witner meeting of the Canadian Bar Association, held at the Royal York Hotel, on the subject of changes in law. The item has been heavily annotated by Gale.