Fonds consists of records relating to the administration, operation, and activities of the Whitby Dunlops hockey team. Records were created by the executive members of the Whitby Senior Hockey Club. Fonds is comprised of the following series: Fina... 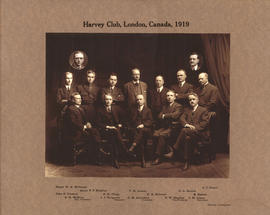 The collection consists of photographs; scrapbooks of correspondence, photographs, and newspaper clippings; monographs; poetry and prose; biographical information; and other material complied by and about Emily Stowe and Augusta Stowe Gullen. Mate...

Eastern Synod of the Evangelical Lutheran Church in Canada fonds

The fonds consists of historical documents, publications, correspondence, church records, minutes, sermons and addresses, reports, photographs, and other material produced and accumulated by the Eastern Synod of the Evangelical Lutheran Church in ...

The fonds consists of publications, reports, correspondence, papers, maps, surveys, notes, inventories, newspaper clippings, statistics, and other material produced and accumulated by Kenneth Hewitt. Fonds is comprised of the following series: Per...