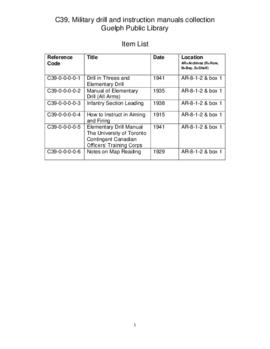 Collection consists of instruction manuals for aiming and firing, map reading, elementary drills, and a work focusing on infantry section leading. Many of the manuals contain illustrations and diagrams. These materials were used by Guelph's... 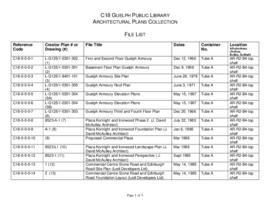 Collection consists of architectural plans of Guelph businesses, recreational facilities, and military instillations. They include the Stone Road Plaza, Knortigh Plaza, the Guelph Armoury and the branch libraries.

Collection consists of a collection of documents from the former Royal Canadian Army Service Corps Museum. Includes the Corps orders for 1905 to 1926, minute books for the RCASC Bus Service Committee and the Canteen Committee, and the RCASC Associ... 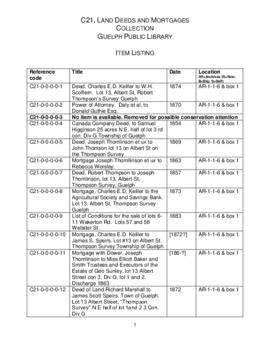 Collection consists primarily of deeds and mortgages pertaining to land and administrative transactions in the Guelph area. Many of the records in this collection deal with the properties located on lot 13 Albert Street of the Thompson Survey or w...

Letters, minutes, reports, and other documents regarding schools at the Lakehead: early Port Arthur, Fort William, and the region.

Consists of photographs of particularly mining development in Northwestern Ontario in the late 19th and early 20th centuries, as well as the waterfront and shipping, local scenery, and notable figures. Also includes some correspondence; railway co...

Most of the records consist of letters written to Mark Young Stark and his wife, Agatha, in Dundas. Correspondents include friends and family in Scotland or friends and colleagues in Upper Canada. Of the Scottish letters, those from Stark’s stepmo... 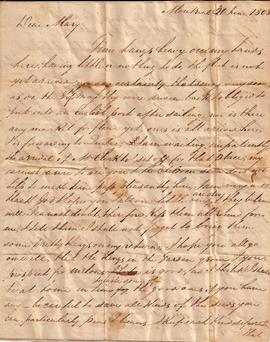 The collection is comprised of a range of letters, petitions, grants and notes from a number of activities, including correspondence, leases, land patents, and wills. Also included are items that were not acquired during the lifetime of Richard H...

This collection consists of assorted documents, clippings, a time book, correspondence, tickets, and other ephemera related to the Bowman family. The collection includes an essay “Tentative Bowman Family Tree” by T. Roy Woodhouse in 1961.

This collection contains photograph albums pertaining to Trinity College School dating from the earliest years at the school to the present time.

Collection consists of records accumulated by Barry Pepper. There are photographs of exterior views of Osgoode Hall and the southeast gate. The photographs were used for the bicentennial stamp submission by the Bicentennial Committee, of which Pep...

Materials related to the architectural history of Lakehead University, as presented at the Thunder Bay Art Gallery.

The collection consists of six photograph albums containing over 1800 black and white photographs and more than 20 panoramas that document the construction of the Alexander Falls hydroelectric dam on the Nipigon River north of present-day Thunder ...

The collection consists of a series of the Northern Times newspaper, for 1976 and from 1983 to 2018. Some issues are missing.