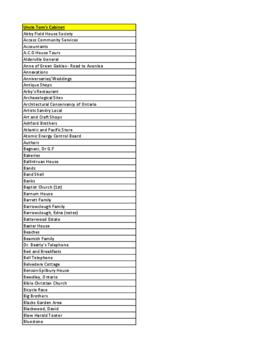 Fonds consists of an operations plan and interim operations plans for 1 Air Division when it was stationed at Metz, France during 1953-1955. The operations plan was designed to meet a situation in which war had been forced upon the NATO nations by...

Fonds consists of 16 folders containing 89 files in total, a few of which are in two parts. Files deal with the organization, methods of operation and approach of the 1 Canadian Division Intelligence Company and the 5 Canadian Mechanized Brigade G...

Fonds consists of a document in 1990 or 1991 outlining the structure of the support component of Joint Force Headquarters. This document details the various branches of the support unit and their responsibilities as well as the concept of support ...

Fonds consist of an unofficial journal recording the daily activities of the 1 CFFTS, specifically the detachment located at Cold Lake, between 1970 and 1971. The journal provides information concerning pilots, candidates, personnel, training miss...

Fonds consists of transcripts of Record of the Evidence, Record Proceedings, witness statement and evidence for the trial of Kurt Meyer. Also includes documents for many others trials for alleged War Crimes. In addition, there are several miscella...

Fonds consists of document entitled “UNPROFOR Engineer Mine Guide.” It is an early manual prepared by 1 Combat Engineer Regiment (1 CER) for identifying and clearing landmines in Yugoslavia. The manual was prepared in 1992 when 1 CER served with...