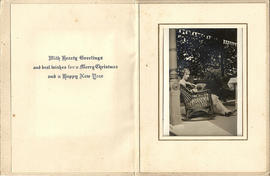 "With Hearty Greetings and best wishes for a Merry Christmas and a Happy New Year"Christmas card with photograph of Evelyn Hall sitting on the porch of 426 Thomas Street, Deseronto, Ontario. 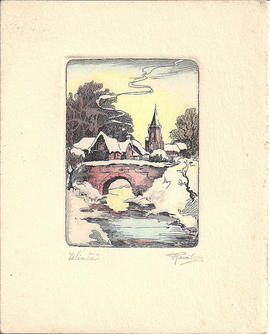 Printed Christmas card depicting a snow-covered bridge over a small river, with houses, trees and a church in the background. The picture is entitled 'Winter' and signed 'Revilo'. The card was published by Old Colony Greeting C...

Files of correspondence, post cards and Christmas cards addressed to female members of the Hall family.

Photographs of men and aircraft at Camp Mohawk and Camp Rathbun, Deseronto, Ontario. Include several of crashes and three of Lieutenant Colin Goss Coleridge's funeral on July 26th, 1918. Men (air cadets) identified in the photographs are Paul...

Portraits and snapshots of the Hall family, their friends and relations. Around half the photographs have no identifying information on them. Individuals named in the other photographs include: Albert and Ellen Hall; Elinor Tunnecliffe (later Mrs ... 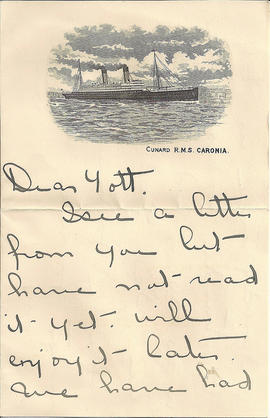 First page of a letter from Adeline 'Dell' Grafton to Evelyn 'Tottie' Hall, written on October 3, 1905. The letter head has a drawing of the ship captioned "Cunard R.M.S. Caronia".

File of letters, mainly from Dell Grafton, who was a school friend of Evelyn Hall’s from Havergal College, Toronto. The letters were written between 1900 and 1905 and describe Dell Grafton’s social life, clothes, parties and boyfriends and were wr...

Letters to the Hall family women

Stories, a poem and a volume containing pressed flowers, originally an account book of John Anderson. File also contains a lock of dark blonde hair in an envelope from Ontario Ladies College. 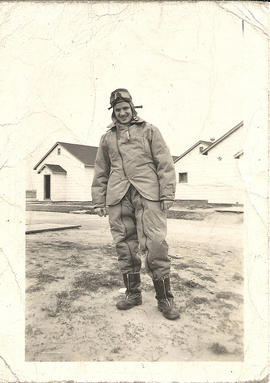 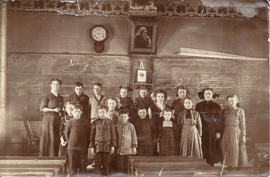 Group photograph of Flossie Hall and her students at School Section No. 10, Mariposa, Victoria County, Ontario.The photograph was taken on March 28, 1912. It shows six boys and ten girls, standing in front of the blackboard of the school. Above th... 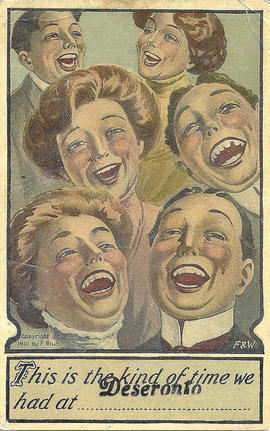 Postcard drawn by F. Bluh, 1910. "This is the kind of time we had at...Deseronto". The word 'Deseronto' has been stamped onto the printed card in ink. 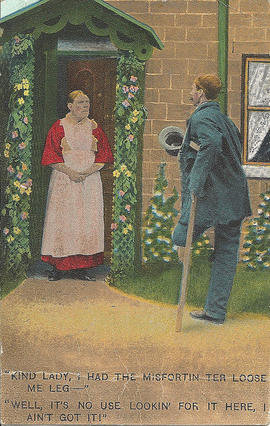 Postcard depicting a one-legged man at the door of a woman's house. The text reads:"KIND LADY, I HAD THE MISFORTIN TER LOOSE ME LEG-""WELL IT'S NO USE LOOKIN' FOR IT HERE, I AIN'T GOT IT!"Published by Bamfor...

Postcards and Christmas cards addressed to, or created by, the Hall family.

File contains a variety of papers relating to the activities of the Hall family. They include:letter from H.B. [Hugo Burghardt] Rathbun to the Dominion Bank in Napanee, 1879;debenture for St. Mary Magdalene Church in Napanee, 1880;programme of a c...