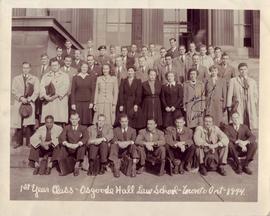 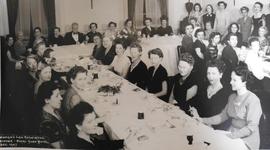 Harriet Anna Laura Clark was born in Toronto on March 23rd, 1908, the oldest daughter of Herbert A. Clark and Laura Clark. She attended the University of Toronto, University College, where she obtained a B.A. in 1934. In 1944, she entered Osgoode Hall Law School. At the time of her call to the Bar in 1947, she received the Wallace Nesbitt Essay Prize. In addition to her legal practice, Clark was actively involved in a number of organizations, including the Women's Canadian Historical Society, the Provincial Council of Women of Ontario, the University Women's Club, and the Women's Missionary Society. She was a long-time member of the Women's Law Association of Ontario and served as both vice-president and archivist in the 1950s. Harriet Anna Laura Clark died on May 9th, 1992, in Toronto.

Fonds consists of records created and accumulated by Harriet A.L. Clark, a Toronto-based lawyer. The records document her studies as a student at Osgoode Hall Law School, her involvement with the Women's Law Association of Ontario, her connection to the Law Society of Upper Canada, and her participation in legal events, such as the Commonwealth and Empire Law Conference of 1955 and 1960. Records in the fonds include lecture notes, examination questions and booklets, certificates, ephemera, and photographs. Fonds is comprised of the following series: Certificates Course materials Ephemera Photographs Women's Law Association of Ontario material

Fonds is arranged in five series.

The Harriet A.L. Clark fonds is also located at the University of Toronto Archives.

Explanatory notes written by the archival donor, Mattie Clark, appear in some files.