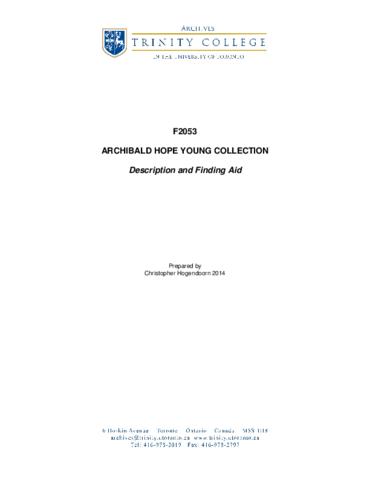 Archibald Hope Young, educator, was born on 6 February 1863 in Sarnia, Upper Canada, and died on 6 April 1935. He was the son of Archibald Young and Annie Wilson. Archibald Hope Young was educated at Upper Canada College, Toronto, where he was "head boy" in 1882. He graduated from the University of Toronto in 1882 with an honours degree in modern languages in 1887. Young began teaching at Upper Canada College in 1887. In 1892 he became lecturer in modern languages and philosophy at Trinity College, Toronto, was made professor in 1900, was college librarian, 1896-1902, and became clerk of convocation and college registrar in 1901. He published widely on the history of Upper Canada, the Church of England in Canada, Upper Canada College, and Trinity College, and was a frequent contributor to newspapers, magazines and reviews; he was engaged for a long time in writing biographies of John Strachan and John Stuart that were never published. He was elected president of the modern languages section of the Ontario Educational Association in 1910 and served for a time as president of the Ontario Historical Society.

The custodial history of the Young collection is complex. The material was in the possession of a number
of people before it was acquired by Trinity College,

The records were transferred to the archives in no discernible order. Order has been
imposed by the archivist.