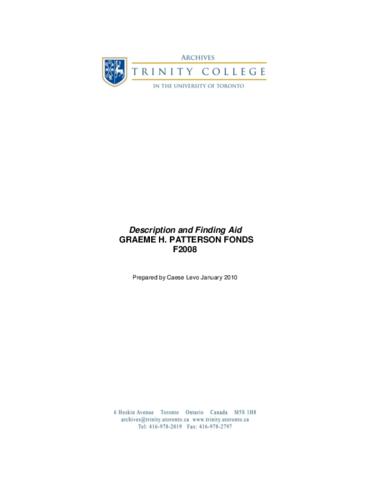 Graeme Hazlewood Patterson, educator, was born in 1934 in Paris, Ontario, and died in Toronto in 1993. He received his early education in Paris and at Ridley College in St Catharines, Ontario. A graduate of Trinity College he earned his BA in 1957, MA in 1959, and PhD in 1970, all from the University of Toronto. Between 1957 and 1963 he worked as an immigration officer in Quebec and taught in Prescott and Brantford. He became Cummings Fellow at Trinity College, University of Toronto, and senior fellow in 1972. He remained at Trinity until his death in 1993 at the age of 58. Patterson was a professor of history at the University of Toronto whose special interests included Upper Canada, Pre-Confederation Canada, and the history of Native Canadians. He wrote numerous entries for the <i>Dictionary of Canadian Biography</i> and in 1990 he published <i>History and Communications: Harold Innis, Marshall McLuhan, the Interpretation of History</i>. He also wrote numerous essays and book reviews. At the time of his death he was working on his new book, “A Political History of Upper Canada”.

The fonds is comprised of material relating to Patterson's teaching activities at Trinity College, including correspondence, manuscripts of his writings and publications, thesis notes, materials for lectures and research materials. The fonds also contains family papers which include material on the people and events of Paris, Ontario, in the nineteenth and early twentieth centuries, including records relating to the immigration of Home Children to Canada.

This fonds was received from the estate of Graeme H. Patterson