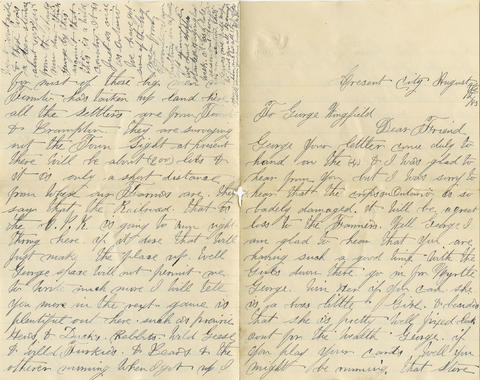 Series includes personal and domestic correspondence addressed to George W. Gordon, including letters sent by Gordon to Mary Ann (Minnie) Beamish during their courtship, and letters from friends from outside the province and country. The latter include letters documenting the settlement of Crescent Lake in the North West Territories. Several files are topical in nature, relating to controversies between Gordon and acquaintances.

This series also includes letters sent by Frank Gordon to his family, some of which document his time at Army camps at Petawawa and in British Columbia at the end of the First World War.

This series was maintained under the title "Gordon letters" in a binder by Gordon's granddaughter, Sandra Gordon (Moore). Moore compiled an inventory of these letters (see Series 7, File 104) but occasionally letters are missing which are present in her inventory. The archivist has imposed some additional order on the series and included the occasional letter not in Moore's original binder. Other letters have been relocated into series pertaining to George W. Gordon's children.