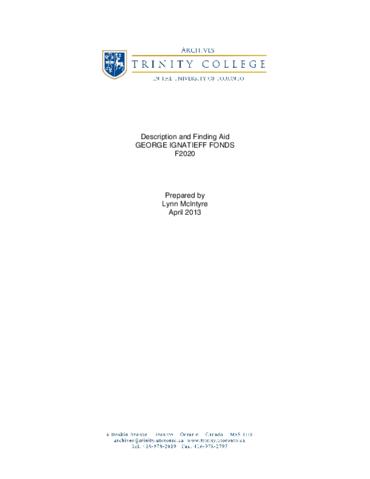 George Ignatieff, diplomat and educator, was born in St. Petersburg, Russia, in 1913 and died on 10 August 1989 in Sherbrooke, Quebec. He was the son of Count Paul Ignatieff and Natalie Ignatieff (née Princess Mestchersky). The family fled to England in 1920 and came to Montreal in 1928. George Ignatieff entered Trinity College, Toronto, in 1932 and graduated with a B.A. in political science and economics in 1936. He was awarded a Rhodes Scholarship and received an M.A. from Oxford in 1938. At Lester B. Pearson's suggestion he wrote the Department of External Affairs examination in 1939, and in that year he began working at Canada House in London. He returned to Canada in 1944 and then went to New York City as a member of the Canadian delegation to the United Nations. He was ambassador to Yugoslavia from 1956 to 1958, assistant undersecretary of state for external affairs from 1960 to 1962, permanent representative to NATO in 1963, and ambassador to the UN from 1966 to 1969. In 1970 he became permanent representative of Canada to the UN at Geneva, a post he left in 1972 to become ninth provost and vice-chancellor of Trinity College for the period up to 1979. From 1980 to 1986 he was chancellor of the University of Toronto. He was the chair of the National Museums of Canada Board from 1973 to 1978, and in the 1980s was active in Science for Peace. He won the Pearson Peace Prize in 1984 and in 1985 the University of Toronto Press published his memoirs, "The Making of a Peacemonger." In 1945 he married Allison Grant and they had two sons, Michael and Andrew.

Fonds consists of records pertaining to George Ignatieff’s professional career and personal life. Genealogical information about the Ignatieff family documents their lives in Russia and immigration to Canada. Some records relate to the Parkin and Grant familes. Family records include memoirs, diaries, photographs, student records, journals and correspondence. Ignatieff’s professional life as a diplomat with the Canadian government is documented by correspondence, subject files, speeches, reports, newspaper clippings and photographs. Records from 1972 to 1986 are mainly from Ignatieff’s career as an administrator at the University of Toronto. These records were generated during day-to-day operations of these offices and include correspondence, subject files, speeches, writings, clippings and notebooks. In addition, there are documents associated with other organizations and activities in which he was involved, as well as documents relating to his honorary degrees and awards. Extensive background material and drafts trace the evolution of Ignatieff’s published memoir, The Making of a Peacemonger.

The first donation of materials was received directly from George Ignatieff. Following his father’s
death, Andrew Ignatieff donated the remainder of the material in various accessions.

The material has been arranged by the archivist following the original order whenever possible.

Various copyright holders, it is the researcher’s responsibility to obtain permission to publish any
part of the fonds.

The fonds is described to the file level. A fully searchable electronic copy of the finding aid is available, as is a paper copy

Throughout this document, George Ignatieff is referred to as "GI" and Alison (Grant) Ignatieff as
"AI". Some early documents refer to her as "JAG" (Jessie Alison Grant) "Ignatieff" is also spelled
as "Ignatiev" In some documents. "Defence" is sometimes spelled as "defense." "Dima" refers to
Vladimir Ignatieff.