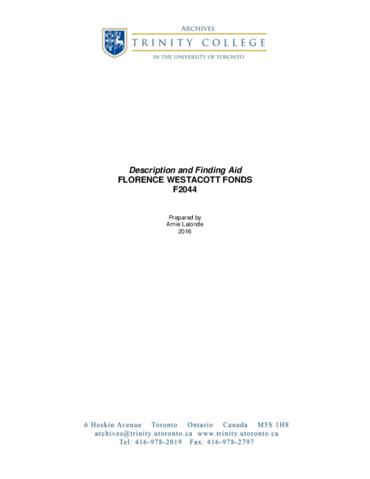 Florence Elizabeth Westacott, was born in March 1877, apparently in Toronto, Ontario, the daughter of George Westacott and Alice Sheen. She entered Trinity College in 1903 and graduated with a BA in 1906 and an MA in 1907. She published poems in the Westminster Magazine, the Globe, and in a small volume, The City Dweller and Other Poems (1935). She won the Victorian Order of Nurses contest for best play in 1934 for Someone Steps In. In 1935 she won the Lady Roddick prize for best sonnet at the Canadian Authors Association poetry competition in Montreal.

Florence Elizabeth Westacott died on 26 February 1966 in Toronto Ontario after a lengthy illness.

Various copyright holders, researchers are responsible for obtaining permission to publish any part of the fonds