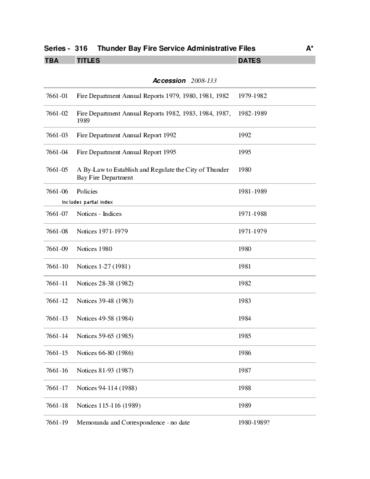 Thunder Bay Fire Rescue was established in 1970 alongside the amalgamation of the former municipalities of Port Arthur, Fort William, Shuniah (McIntyre), Neebing and Paipoonge. At the time of amalgamation the department was known as the Thunder Bay Fire Department and was headed by a Fire Chief who reported to the City Coordinator. The department consisted of four key divisions including Fire Suppression, Fire Prevention, Training, and Mechanical, each presided over by a head officer. The department also maintained an administrative support division. In 1975, following the reorganization of the City, the Fire Chief reported to the Chief Administrative Officer. In 1980, the Fire Department became a sub-department of Engineering and Operations and the Fire Chief reported to the Director, Engineering and Operations.

The organizational structure of Thunder Bay Fire Rescue, at 2011, consists of the following divisions; Fire Prevention and Investigation, Apparatus and Equipment, Fire Suppression, Training, and Administration. Each division is led by a Director and is overseen by the Fire Chief and Deputy Fire Chief. Thunder Bay Fire Rescue is positioned under Community and Emergency Services and reports to the General Manager of this department. The key responsibilities of the department include fire suppression, emergency planning, auto extrication, handling of hazardous materials, industrial accidents, medical assistance, fire prevention (including education and awareness strategies), investigations and rescue operations in situations that involve high and low angles, water and ice and confined spaces.

Series consists of records of Thunder Bay Fire Rescue (previously the Thunder Bay Fire Department) and include annual reports, by-laws, policies and notifications, memoranda, correspondence and meeting minutes. Annual Reports relate to the planning, administration and management of the department and include information about the development of policies, projects undertaken by the department and major incidents experienced by the department within the designated year. Annual Reports also provide statistical information on the operations of the department. In addition to Annual Reports, the notices included in this series describe the rules and regulations set out for fire personnel on a variety of different issues.

Other records predominant in this series include meeting minutes of the Advisory and Operational Committee and the Joint Consultation Committee. These committees generally consisted of the Fire Chief, other division heads and platoon captains and related to operational issues concerning the department.

Also included in this series are meeting minutes of the Thunder Bay District Mutual Fire Aid Association and the Thunder Bay Emergency Measures Organization. These affiliated, yet distinct, organizations were established to further the development of fire prevention, safety and emergency response measures in the area. These organizations consisted of members from fire departments and related emergency services departments across the district of Thunder Bay, and other City officials and representatives.

Records pre-dating amalgamation are the records of affiliated organizations that were operating prior to the amalgamation of the City of Thunder Bay.

This series (particularly Accession 2008-133) has undergone significant re-arrangement due to the state of the materials upon accession.