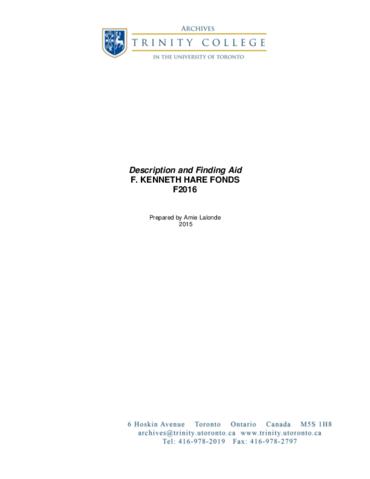 Frederick Kenneth Hare was a climatologist, academic and the tenth Provost of Trinity College. Hare was born on 5 February, 1919, in Wylye, England, to Frederick Eli Hare and Irene Smith. Hare was educated at Windsor Grammar School, King’s College at the University of London (BSc 1939), and the University of Montreal where he received his PhD in geography in 1950.

Hare taught at the University of Manchester from 1940 to 1941 before serving as an operational meteorologist in the Air Ministry from 1941 to 1945. In 1945 he was appointed to teach at McGill University and later became the chairman of the Geography Department (1950-1962) and the Dean of Arts and Science (1962-64). He returned to London where he was Professor of Geography at King's College, University of London (1964-66) and Master of Birkbeck College (1966-68). He was President of the University of British Columbia from 1968 to 1969 before becoming a professor of geography and physics at the University of Toronto from 1969 to 1979 as well as Director of the Institute for Environmental Studies from 1974 to 1979. He became Provost of Trinity College in 1979 and remained in that position until 1986. He also served as Chairman of the Canadian Climate Program Planning Board (1979-90), Co-Chair of the National Academy of Science (U.S.A.)/Royal Society of Canada Study of Acid Precipitation (1980-82), Chair of the Peer Review of the Canadian government's Long-Range Transport of Airborne Pollutants (LRTAP) Program at the Royal Society of Canada (1983-84), head of a study of the nuclear winter phenomenon, RSC (1984), on the Commission on Lead in the Canadian Environment, RSC, Commissioner of the Ontario Nuclear Safety Review (1987-88), Chancellor of Trent University (1988-95), Chair of the Canadian Global Change Program Board, RSC (1989), member of the Board of Directors of the Canadian Institute for Research in Atmospheric Chemistry (1990-93), Chair of the Advisory Board of the Institute of International Programs, University of Toronto (1990-94), member of the Advisory Panel on Research and Development of Atomic Energy of Canada Limited (1991-95), and Chair of the Technical Advisory Panel on Nuclear Safety, Ontario Hydro (1991-94).

Hare was the author of The Restless Atmosphere (1953), On University Freedom (1967), and the co-author of Climate Canada (1974) as well as many articles in scientific journals on climatic, meteorological, and geographic issues. Hare was an Honorary Fellow of Trinity College (1991), a Companion of the Order of Canada (1987), and Companion of the Order of Ontario (1989).

Fonds contains records relating to Hare’s work as a climatologist, geographer, and scholar. Files include correspondence, conference and meeting materials, published and unpublished reports and articles (by Hare and others), scientific data, photographs, newspaper clippings, letters of reference, pamphlets, newsletters, and other publications. Files also include a typed copy of Hare’s memoir, I’ll Always Take a Windowseat, as well as academic certificates and degrees.

Materials were accrued in nine accessions from Kenneth Hare.

Materials have been left in the original order. Dr. Hare was a careful record-keeper and the decision was made to maintain his files in the order they were received.