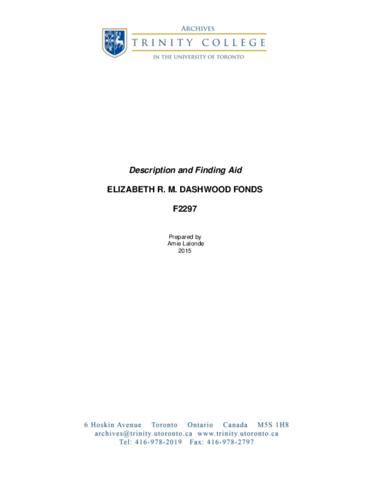 7 cm of textual and other records
8 photographs

Elizabeth ‘Betty’ Rose Miriam Dashwood (née Southgate) was a student of St Hilda’s College who graduated with the class of 5T2. Betty Southgate was born on 12 January 1929 in Toronto, Ontario and lived in Rosedale before her father moved the family to England. The Southgate family returned to Canada in 1940 as the Second World War began and once again settled in Rosedale. Dashwood attended Branksome Hall, where she was a sub-prefect, and graduated in 1948. She then attended Trinity College and was very active in college life. A member of the St Hilda’s Athletic Association (serving as secretary in her third year and president in her fourth), she played on the basketball, baseball, and volleyball teams, and was treasurer of the St Hilda’s Literary Institute and secretary of the Trinity Arts and Letters Club in her third year.

After graduating with a B.A. in modern history in 1952 she worked at the Canadian Cancer Society, remaining in the Trinity community. She served as St Hilda’s 5T2 year representative until her death, served on the St Hilda’s Board of Trustees from 1965 to 1969, was a member of Trinity Corporation from 1969 to 2003, served on the executive committee of Corporation, and was a member of the Provost’s Committee. An early member of the Friends of the Library, she remained a committed organizer of the Trinity Book Sale until her death. In recognition of her service to Trinity College, she received the St Hilda’s Alumnae Association Long-Service Award and the U of T Arbor Award in 2002.

Mrs. Dashwood was also very active in her community: she served various roles in the Church of St Simon the Apostle and ran St Simon’s Out of the Cold programme in the early 1990s and St Peter’s Food Bank until her death. She was a long-time active member and board member of the Architectural Conservancy of Ontario. Dashwood was also active politically for the Progressive Conservative Party; in the 1980s she was the federal returning officer for Rosedale for at least two elections and one referendum.

Betty Southgate married her classmate John Dashwood (5T2) in 1957, they had two children: Geoffrey and Monica. Betty Dashwood died on 6 April 2003 at her home in Toronto, Ontario.

Fonds consists of personal documents from Betty Dashwood’s time at Trinity College. Files include correspondence and information about College and University registration, classes, and services, newspaper clippings, receipts, invitations, and programmes. Files also include a wooden St Hilda’s plaque with Elizabeth Dashwood’s name and year on it, a felt T with the U of T crest, an attendance book for the St Hilda’s Alumnae Association, and 8 black and white photographs of Trinity teams and clubs.

Materials were received in one accession from Elizabeth Dashwood

Materials have been left in their original order; photographs have been filed in the appropriate photograph boxes.