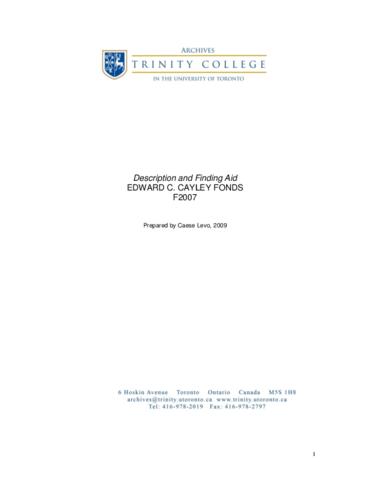 Edward Cartwright Cayley, educator and Anglican clergyman, was born on 13 February 1864 in Whitby, Upper Canada, and died on 11 April 1921. He attended Trinity College, Toronto, where he was Wellington scholar, Burnside scholar, and Bishop Strachan scholar. He obtained a B.A. in 1885, was awarded an M.A. in 1889 and a D.D. in 1914. E.C. Cayley was professor of divinity at Trinity College from 1892 to 1900, when he was appointed rector of St. Simon’s Church in Toronto. He continued as special lecturer in apologetics at Trinity College. He married Georgina Alice Broughall in 1895.

The fonds consists of correspondance relating to Cayley’s appointment to St. Simon’s Church in 1900, clippings of articles written by Cayley, and manuscripts of sermons and talks by Cayley.

The Edward C. Cayley fonds was donated to the Trinity College Archives by Cayley’s daughter, Sylvia Crosthwait, in 1981. No further accruals are expected.