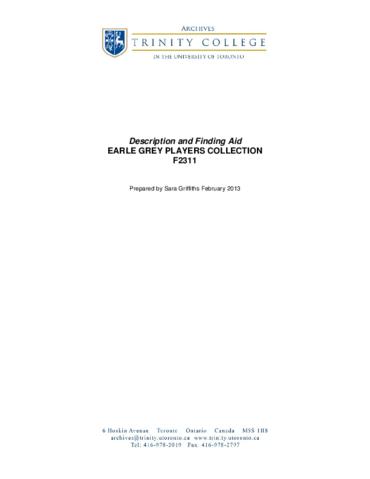 For two nights in June 1946, the Earle Grey Players staged a production of Shakespeare’s <i>Twelfth Night</i> on the north terrace of the Trinity College quadrangle with the support of the Provost of Trinity College Dr. R.S.K. Seeley. The company of players was founded by Earle Grey and his wife Mary Godwin, British actors with a wealth of theatrical experience who moved to Canada in the early 1940s. They established the Earle Grey Players with the goal of cultivating an appreciation for Shakespeare in Canada and presenting Shakespeare’s plays in a way closely aligned with the original spirit and intent of the playwright. The critical success of <i>Twelfth Night</i> led to productions in other locations and in the following summer of 1947, audience demand resulted in the presentation of <i>A Midsummer Night’s Dream</i> for five nights at Trinity College. Also in 1947, plays were staged at Central High School of Commerce which initiated a series of school productions in support of the founders desire to bring the stimulation and excitement of Shakespearean drama to school audiences.

On June 27th, 1949, at Trinity College, the Earle Grey Players opened the first official Shakespeare Festival with a production of <i>As You Like It.</i> Revealing the significance of the event for the cultural life of Toronto, the festival was opened by the Lieutenant-Governor of Ontario and Mrs. Ray Lawson and had the backing of City Council and tourist associations as well as growing press coverage. With the broader goal of representing Shakespeare’s time, free Elizabethan music concerts using period instruments were added to the festival programme as well as an exhibit in the Trinity College Entrance Hall of books and prints relating to Shakespeare. In support of the Shakespeare Festival, both the Royal Ontario Museum and the Toronto Art Gallery put on exhibits and displays of pottery, furniture, costumes, photographs and prints relevant to Shakespearean times.

In 1950 four comedies were produced at the Festival and the Earle Grey Players expanded their tour of Shakespearean productions to other locations and high schools. In 1951, the Trustees of Shakespeare’s Birthplace (Stratford-Upon-Avon) presented a mulberry tree to the Festival which was planted in the Trinity quadrangle. By 1951 there was a growing wardrobe department under the direction of former Hart House Theatre Designer and Assistant Director Mabel Letchford who developed an extensive Elizabethan wardrobe including articles donated by renowned English actors. As news of the Festival’s existence had travelled to England, donations of theatrical suits of armour and other items began to arrive.

The first effort to present a Shakespearean tragedy was in 1952. <i>Julius Caesar</i> was presented to great acclaim. With audiences continuing to grow, the Earle Grey Players took Shakespeare’s plays to more than 24 high schools. For the 1952 season the Festival displayed a rare First Folio of Shakespeare’s plays printed in 1623, a donation from the Folger Library in Washington and the first instance of a First Folio on Canadian soil.

The Earle Grey Players Shakespeare Festival was produced annually until 1959, when renovations at Trinity College necessitated finding a new home for the festival. When nothing materialized, Mary Godwin and Earle Grey returned to England and continued acting until their respective deaths in 1971 and 1978.

The Earle Grey Players Collection consists of programmes and brochures for the annual Shakespeare Festival held at Trinity College, historical information on the founding and development of the Shakespeare Festival, and ephemera related to the Festival, including a bronze plaque commemorating the location of a mulberry tree grown from a tree in Shakespeare’s birthplace Stratford-on-Avon.