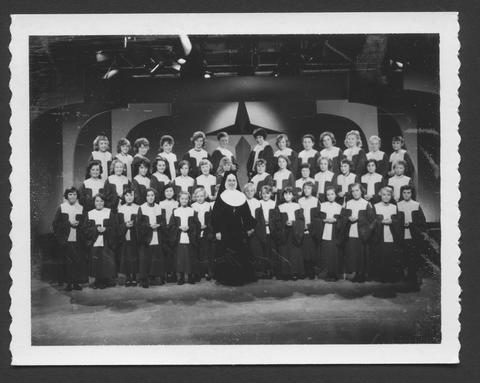 The Monsignor W. T. Flannery Radio and Television Broadcasts, known as the “School of Christ,” was a radio and television program that aired from 1939 to 1963. Founded by Monsignor W.T. Flannery, the radio broadcast was transmitted from the Chapel of the Sacred Heart Convent in London, Ontario encouraged by Sister Constance Dunn, as General Superior. The program made its debut on CFPL Radio in London, Ontario, on December 3, 1939. Named after a phrase from the writings of St. Augustine, the program’s stated purpose was to educate people about the true Catholic faith as a way of combating anti-Catholic prejudice. The 30-minute long program aired on Sunday afternoons and consisted of Msgr. Flannery providing catechetical instruction and a question and answer segment with schoolchildren. There were also musical performances by the “School of Christ Choristers” formed by Sister Mary Margaret Childs. The School of Christ Choristers consisted of a senior choir, of women aged 18 years and older, directed by Sister Mary Margaret Childs from 1939 to 1963, as well as a Junior Choir, known as the “Little Radio Choir,” composed of Grade 6 to 8 students, later directed by Sister Marie Brebeuf Beninger. Originally a local broadcast, the School of Christ became syndicated in Toronto, Chatham, and Windsor in 1940. Soon after, it extended into the states of Michigan, Ohio, Indiana, Pennsylvania, and New York. At one point, the program was estimated to have had a potential listening audience of 10 million people, many of them non-Catholics. Starting in the mid-1950s, the programs were taped in advance and broadcast on CFPL-TV until 1963, when Msgr. Flannery retired.

Members of the Congregation of the Sisters of St. Joseph played an instrumental role in the formation and operation of the program. Sister Constance Dunn encouraged the formation of the program during her term as the Congregation’s General Superior. Sisters Marie Brebeuf Beninger, Mary Margaret Childs, and Maureen Dalton participated in the direction of the show’s choirs, while Sister Callistus Arnsby provided accompaniment. Although the primary forum for these choirs to perform was through radio and television, they also gave annual live concerts in a variety of venues, including London’s Grand Theatre, the auditorium at H.B. Beal Technical School, and Toronto’s Massey Hall Theatre in 1964.