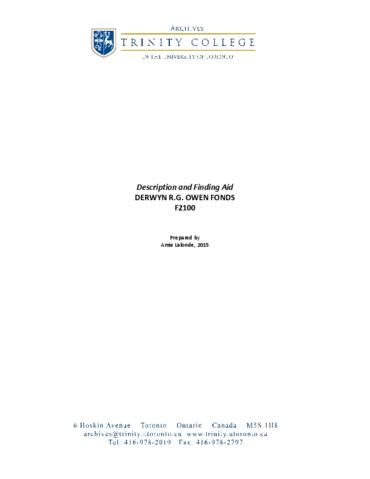 Derwyn Randolph Grier Owen, Anglican clergyman and administrator, was born on 16 May 1914, the son of Derwyn Owen and Nora Grier Jellet. He attended Ridley College in St. Catharine's from 1928 to 1932 and then Trinity College, where he took honours in Classics, graduating with a B.A. and the Governor General's Medal in 1936. He studied next at Corpus Christi College, Oxford, 1936-1938, and the Union Theological Seminary, New York, 1940-1941. He was ordained deacon in 1941 and priest in 1942 and completed his Ph.D. in Philosophy at the University of Toronto the same year, while teaching at Trinity College. In 1942 he enlisted in the Canadian Army and served as chaplain in the Westminster Regiment, 5th Division, on campaigns in Italy and Holland. He returned to Canada in 1946 and resumed his post as lecturer and head of the Department of Religious Knowledge at Trinity. In 1957 he was elected Provost of Trinity College and served in that capacity until 1971 when he resigned to continue teaching. He served as Professor of Religious Studies until his retirement in 1979. Owen published several books, including Scientism, Man and Religion (1952), Body and Soul (1956), Social Thought and Anglican Theology (1980), and Trinity College: Past, Present and Future (1964).

He married Anne Kathleen Armour in 1942, and they had three children: Laurie, David, and Timothy. He died on 23 April 1997 in Toronto, Ontario.

The fonds was received in five accessions. Some material was given by Dr. Owen before his death; the rest was given by his estate and family after his death

Materials have been arranged by the archivist in chronological order within each series. Oversized materials can be found in Oversized Box 1.

Derwyn Owen’s official records as Provost of Trinity College can be found in F1002, accession number 1986-0012.