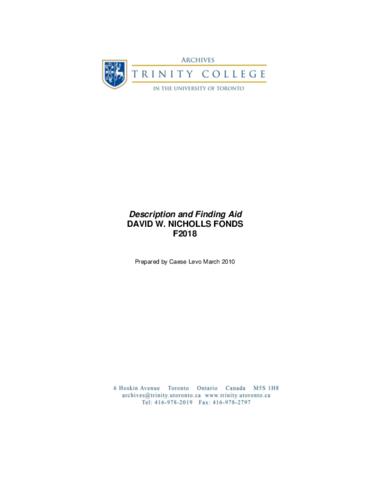 David Wight Nicholls, businessman and photographer, was born in 1934 and died on 4 April 1995. He studied at the University of Toronto Schools before coming to Trinity College. He graduated with a B.A. in 1958 and in 1959 he married Hilary Warren. Nicholls worked for Royal, Montreal, and Canada Trust companies in Montreal, Saint John, and Toronto before retiring in 1987 and devoting more time to photography, which had been a long-time interest. He became a member of the Photographic Society of America in 1983, and was active in the National Association of Photographic Art, the Toronto Guild for Colour Photography, and the Toronto Camera Club, which he guided through its centennial year as president. He also served as president of the Greater Toronto Council of Camera Clubs. In 1990 he became a licentiate of the Royal Photographic Society in Great Britain. He participated in a number of group shows in Canada and Great Britain, and had two one-man shows in Canada. He also had work published in "The Photography Yearbook" (1993). He photographed many parts of Trinity College, and at the time of his death had almost completed a series of photographs of St. James Cemetery, taken as part of the celebration of the 150th anniversary of its consecration by Bishop John Strachan. He served on the Corporation of Trinity College and was a member of the Executive Committee of Convocation. Along with Hilary, he was a strong supporter of the Thomas Fisher Library and the Osborne Collection, and he was especially generous with the Friends of the Library, Trinity College, of which he was treasurer for several years.

The fonds consists of files and photographs documenting his involvement with Trinity College, including the Friends of the Library and Corporation. His extensive collection of photographs, both slides and prints, is included in the fonds.

Fonds was donated by Hilary V. Nicholls in 1995.

Material has been organized by the archivist. Slides have been maintained in the cabinet in which they arrived.

It is the researcher’s responsibility to obtain permission to publish any part of the fonds. Reproduction and publication restrictions apply to graphic materials.