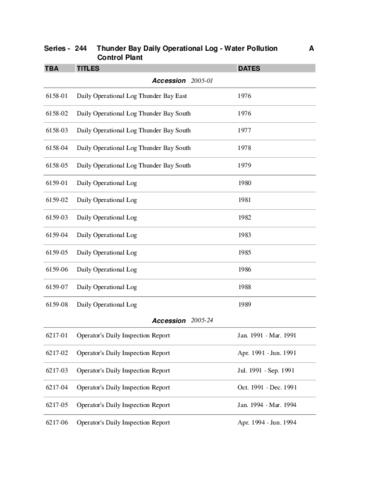 On April 1st, 1977, the Thunder Bay Water Pollution Control System was transferred from the Ministry of Environment to the City of Thunder Bay. The system consisted of two primary treatment facilities. One was located on Atlantic Avenue in the South Ward, the other was located on Main Street in the North Ward. In November 1977, the expansion of the south plant was finished, and the north plant ceased from operation. In 1999, the City of Thunder Bay adopted the Pollution Prevention and Control Plan. The treatment process utilized at the plant was upgraded. In 2004, the City of Thunder Bay received a $25-million joint funding from the Government of Canada, which marked that the Thunder Bay Wastewater Treatment Project entered into a new phase. This funding will be used to upgrade the Water Pollution Control Plant from primary to secondary treatment and allows the city to complete the work required to improve the sewer collection system and enhance the sewage treatment process.