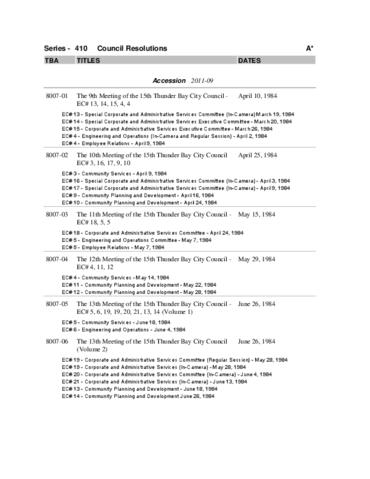 Under the Municipal Act (2001), City Council votes on the passing of new by-laws and the amendment of existing by-laws in Council meetings, based on recommendations and advice from the Office of the City Clerk. Council also delegates statutory responsibilities to subcommittees, and through Committee of the Whole Meetings, Council discusses critical issues covering the broad mandate of the City. It is through Council Meetings that decisions are made and resolutions are achieved on the matters discussed in Committee of the Whole Meetings. Resolutions serve as a record of the motions carried and lost by City Council through Council Meetings.

Mayors presiding over Council in the time reflected in this series include Walter Assef (1973-1978 and 1981-1985). The Office of the City Clerk is responsible for maintaining the records of proceedings for Council.

Series consists of duplicate meeting minutes of City Council and attached resolutions for each meeting. Each resolution is signed by the councilors responsible for moving and seconding the resolution. It is also signed by the Mayor or Chairman of the council meeting and the City Clerk.

Each file contains an index in the front explaining which meetings and dates are included in each individual file.