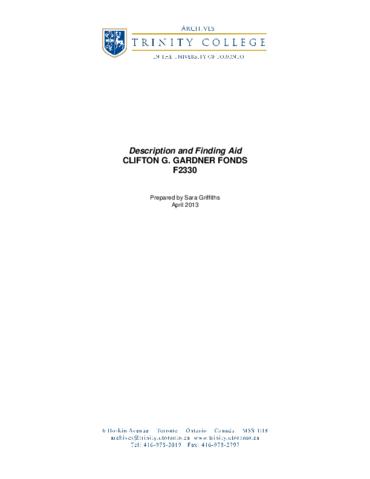 Clifton Gordon Gardner, Anglican clergyman, was born on September 29, 1915 in St. John’s, Newfoundland, son of W.J Gardner. After obtaining his BA from Trinity College in 1936, Gardner was deaconed in 1939 and earned a Bachelor of Divinity from King’s College at the University of London in 1940.

Gardner was on the clergy list of the Diocese of Oxford from 1939 to 1952, and began as a curate at St Luke’s, Maidenhead. His ministry there was superseded from 1941 to 1946 by service as Chaplain in the Royal Navy Volunteer Reserve. With the help of the Newfoundland Trade Commissioner, Gardner obtained an interview with the Chaplain of the Fleet. Although only 25 years old in March of 1941 (younger than the chaplaincy age minimum of 28 years), he was appointed Probationary Temporary Chaplain to the Royal Naval Barracks at Chatham by mid-April and to the Third Destroyer Flotilla in the Home Fleet of the Royal Navy by mid-May. In 1942 he was appointed to the First Destroyer Flotilla and over the next three years he served as Chaplain on the fleet destroyers HMS Impulsive, HMS Inglefield, and HMS Intrepid and as Chaplain to Destroyers and Small Craft. Some of these destroyers acted as escorts to long-haul Arctic convoys between Britain, the US and Russia and Gardner was on board for four such trips through dangerous waters. In 1945 he was appointed Chaplain to the aircraft carrier HMS Indefatigable of the British Pacific Fleet in Japan, but by the time Gardner reached the Indefatigable the war in the Far East was over. Upon his release from the Royal Navy in 1946, Gardner returned to his ministry at St. Luke’s for one year then became Vicar at St. Peter’s, Maidenhead for five years.

Gardner returned to Canada in 1952 when he became Rector of St. Luke’s Church in St. Thomas, Ontario. In 1956 he was appointed resident Anglican Chaplain at Westminster Veterans Hospital in London, Ontario, where he stayed for 18 years until 1974. While serving at Westminster Hospital, Gardner was active in many clerical areas. From 1960 to 1969 he was an examining Chaplain for Bishop of Huron, the Right Reverend George N. Luxton, and helped prepare candidates for Deacon’s orders. In 1964 he was one of five diocesan clergy appointed as Canons of St. Paul’s Cathedral, London. He also acted as the Clerical Secretary of Huron Synod from 1964 to 1973. Additionally he served as the Secretary of the Diocesan Committee, where he drafted pamphlets on burials, marriage, baptism, confirmation and the duties of Church Wardens for consideration at clergy conferences. Also while at the Diocese of Huron, Gardner acted as Secretary of the Spiritual Advance Committee.

In June 1974, Gardner was inducted as rector of St. Peter’s Church in Dorchester and became Archdeacon of Middlesex, Ontario with 70 parishes to supervise. Two years later, in 1976, the Gardners retired to Saffron Walden in England. In 1977, however, Gardner was still at work in many area parishes and helping in the deanery of most. He officially retired in 1983, and he and his wife travelled extensively for the next ten years until her death in 1993. Gardner returned to helping with services and was an active member of a Bereavement Visiting Group.

Gardner married Elizabeth Kathleen Baker from Yorkshire in 1942. They had a daughter, Elizabeth, in 1944, and a son, Michael. Clifton Gardner died in March of 2009.

This fonds consists of records about the life and career of Clifton Gardner as an Anglican priest in England and Canada as well as his time as Chaplain in the Royal Navy. The fonds includes some published and unpublished works authored by Gardner, his sermon notebooks, and a diary.

Copyright not held by the archives. It is the researcher's responsibility to obtain permission to publish any part of the fonds.