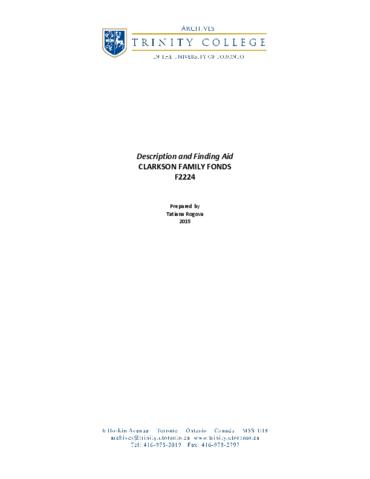 The Clarksons were a prominent Toronto family associated with the accounting and stock brokerage firm, Clarkson Gordon. The majority of the records in this fonds pertains to Alice Amelia Clarkson (née Baines, 14 December 1881 - 10 March 1964), daughter of Mary Louise Baines (née Conventay, 1858-1933) and Christopher C. Baines (b. 1846), and her descendants. Alice Clarkson, sometimes referred to as Vally, attended Bishop Strachan School before enrolling at Trinity College in 1901. She graduated with a B.A. in 1904. Alice Clarkson’s sister, Marguerite Baines (1884-1951?), a frequent and constant correspondent of her sister, never married and lived with her mother. Marguerite and Alice would often accompany Mary Baines on her frequent travels to Europe, Asia, and the United States. By the 1920s, Marguerite and her mother would take up permanent residence in Vancouver.

Alice and Frederick Clarkson had three children, Margaret Eleanor Clarkson (b. 8 May 1912), Frederick Curzon Clarkson (1914-1973?), and Cuthbert B. Clarkson (b. 1920). Margaret (Margot) Clarkson studied at Ovenden College, Barrie, before attending Trinity College in 1929. She graduated with a B.A in 1933. She never married and became a social worker based in New York City in the 1940s. Like her mother and grandmother, she travelled extensively in her youth during the 1930s.

Curzon Clarkson attended Lakefield Preparatory School as a child and entered Trinity College in September of 1933, where he stayed until May of 1934. In September 1934 he transferred to a vocational training school in Detroit, Michigan, most likely the General Motors Institute. Curzon married Mary Louise Porter with whom he had two children: Frederick (Rick) Clarkson (1944?-1998) and Pegi Clarkson (d. 2014). He settled in St. Catharines, Ontario, with his family.

Cuthbert Clarkson attended Upper Canada College and Queen’s University. In 1941 he joined the Royal Canadian Ordnance Corps and served overseas in Britain most likely from 1943 to 1946. His marital status is unknown. He appears to have resided with his mother, Alice Clarkson, during the final two decades of her life.

The fonds is largely a collection of correspondence between various members of the Clarkson family, spanning most of their lives from 1904 to about 1963. A substantial amount of the material focuses on their travels and the primary recipient is Alice Baines Clarkson. The fonds also contains family and Trinity related photographs, diaries, records from the Women’s Musical club, and other memorabilia.

Helen Slade, Nursing Don at St. Hilda’s, Trinity College, brought the records to the Trinity College Archives in the 1980s. They were accessioned and ownership was formally transferred by Pegi Clarkson in 1991.

Arranged by the archivist.