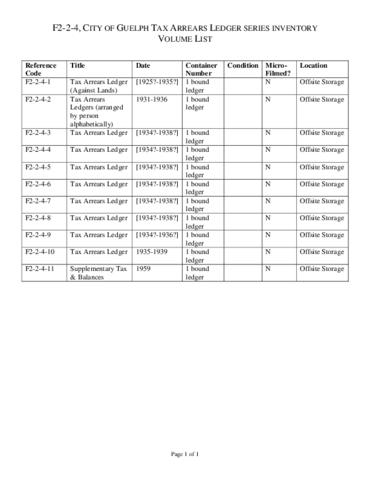 The City of Guelph tax collector was appointed by City Council for a one year term. Council could also appoint a second collector, if needed. The tax collector's duties were prescribed by by-law and included the collection of public and separate schools, city and local improvement taxes within the City of Guelph. In 1886, the City Collector also acted as the Police Clerk and handed over all fines, forfeitures and costs received in police court during the preceding month, to the City Treasurer.

Series consists of eleven bound ledgers, which document the amount of school and city taxes and local improvement charges paid and still owing by residents to the City of Guelph. These records document the tax collection system in Guelph.

The volumes are arranged chronologically by year.

To view these records, please consult Volume Listing F2-2-4 to narrow down your search and to identify specific volumes for retrieval. Please order the volumes from the Guelph Public Library Archivist. Please note that these volumes are stored off-site and require advance notice for retrieval.

It is assumed that the tax arrears ledgers were created by the tax collectors as the ledgers show tax amounts that were outstanding and owing to the City of Guelph.