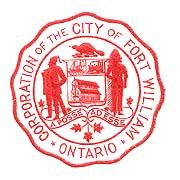 139 m of textual records and other material

In 1873, the Corporation of the Municipality of Shuniah was established. (Ont. Stat., Capt. 50, 36 Vic.) Shuniah, which consisted of Thunder Cape and Prince Arthur’s Landing along with the townships of McGregor, Crooks, McTavish, McIntyre, Paipoonge and Neebing (including Fort William), was the first incorporate municipality in northwestern Ontario. In response to a petition submitted by various residents of Shuniah, the legislature passed an act in March of 1881 (Ont. Stat., Cap 43, 44 Vic) which provided for the withdrawal of various portions of the muncipality, i.e. the geographic townships of Blake, Crooks, Pardee, Paipoonge, Neebing, McKellar, along with Sundry islands, in order to establish the Municipality of Neebing. With the growth of population and development of manufacturing and shipping, a portion of the Municipality of Neebing was withdrawn in order to incorporate the Town of Fort William in 1892. (Ont. Stat., Capt. 70, 55 Vic.)

As a result of substantial commercial growth, coupled with an increase in population during the early years of the twentieth century, the inhabitants of Fort William petitioned the Ontario legislature for incorporation as a city. Consequently in 1907, the Ontario government passed legislation which elevated Fort William (Ont. Stat.., Capt. 66, 7 Edward. VII) to city status. In 1969, the Ontario legislature passed an Act to Incorporate the City of the Lakehead (Ont. Stat. , Capt. 56) which provided for the amalgamation of Fort William into the new Corporation of the City of Thunder Bay. When this Act took effect on Jan. 1, 1970, Fort William ceased to exist as a separate entity.

The fonds consists of minutes, by-laws, agreements, correspondence, reports, financial records , maps and plans which documents virtually all aspects of municipal rights, responsibilities and activities. As a result of a disastrous fire in March of 1903, which destroyed the original Town Hall and almost all of the municipality’s early records, there is relatively little documentation covering Fort William’s first decade. The post 1903 records, however, reflect all categories of municipal functions, and responsibilities including council, administration, finance, waterworks, roads, planning, building, engineering, public transportation, parks, recreation, telephone, welfare, police and fire service.