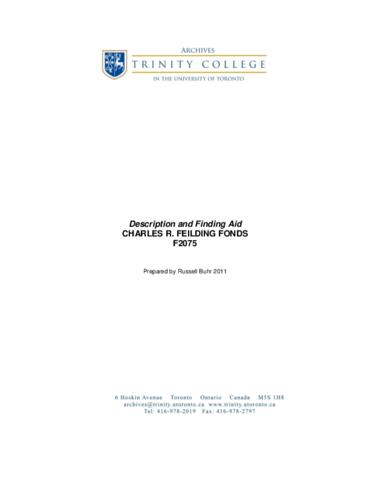 Charles Rudolph Feilding, clergyman, educator, and administrator, was born in Whitford, North Wales, on 16 January 1902 to John Basil Feilding (1868-1942) and Emily Margaret (née Tod) Feilding (d. 1955). After living in North Wales and then in London, England, Feilding emigrated with his family to Canada in 1912, living initially in St. Williams in Norfolk County, Ontario. He was educated at Upper Canada College in Toronto and at Barrie Collegiate before attending McGill University and King‟s College, Halifax, graduating with a BA in 1925. Feilding was ordained deacon and priest in the Episcopal Church of Scotland in 1929. He then studied at the General Theological Seminary in New York as a fellow and tutor, studying the New Testament under Dr. B.S. Easton and beginning a lifelong interest in moral and pastoral theology and training. He also began clinical training and therapy by working closely with psychiatrists and other mental health professionals. He graduated in 1935 with a Doctor of Sacred Theology (STD). In the same year, Feilding became the rector of St. Mary‟s Episcopal Church on Staten Island. He married Ann Truslow, daughter of Ernest Truslow of Southport, Connecticut, on 20 August 1935.

In 1940 Feilding returned to Canada as Professor of Moral and Pastoral Theology and Director of Field Education at Trinity College. In 1943 he became a founder of the Toronto Graduate School of Theological Studies, the forerunner of the Toronto School of Theology (1970). In 1946 he became Trinity College‟s first Dean of the Faculty of Divinity. In this position, Feilding instituted a variety of changes to the teaching of theology, including the introduction of a tutorial system, fewer lectures and more seminars, and an emphasis on training through field work.
In 1957 Feilding co-founded the Toronto Institute for Pastoral Training with Dr. J.A. MacFarlane. Upon his resignation as Dean of Divinity in 1961, Feilding took a sabbatical. As a “visiting fellow” at Yale University, he researched trends in church ministry education. This work would result in his 1966 publication, Education for Ministry. Feilding returned to Trinity College to teach in 1964. Around this time he became the secretary for the Commission on Marriage and Related Matters of the General Synod of the Anglican Church of Canada and would play a significant role in the drafting of a new Canon on Marriage (approved in 1965, confirmed in 1967). Along with H.R.S. Ryan, Feilding produced two commentaries on the new Canon, On Marriage in the Church (1965) and Marriage in Church and State (1965). Feilding would continue to serve on the Subcommittee on Marriage and Related Matters through the 1970s.

In 1965, Feilding formed the Canadian Council for Supervised Pastoral Education (now the Canadian Association for Pastoral Practice and Education) with the Reverend A. MacLachlan. The council provided accreditation for training programs. Feilding retired from teaching in 1970 and was appointed Professor Emeritus of Divinity at Trinity College. At this time he became involved with the Canadian Urban Training Programme for Christian Service. In 1972, he directed a study on the role of women in the Parish of St. Thomas in Toronto. Feilding was an early spokesman for the ordination of women in the Anglican Church of Canada.

Fonds consists of materials written by Feilding in his academic and administrative capacities, including unpublished book manuscripts, articles, sermons, radio broadcasts, newsletters, daybooks, and notes. The subject matter is weighted towards explication and criticism of the Marriage Canon as well as divorce and homosexuality under Anglican Church law. The fonds also contains research materials collected by Feilding (journal and magazine articles, newspaper clippings, pamphlets, and books), correspondence (predominantly with H.R.S. Ryan) and minutes from the Commission on Marriage and Related Matters. Also included is a pastel drawing of Feilding by Constance Wingert.

The material has been arranged by the archivist, based on the original order.

Various copyright holders. It is the researcher's responsibility to obtain permission to publish any part of the fonds