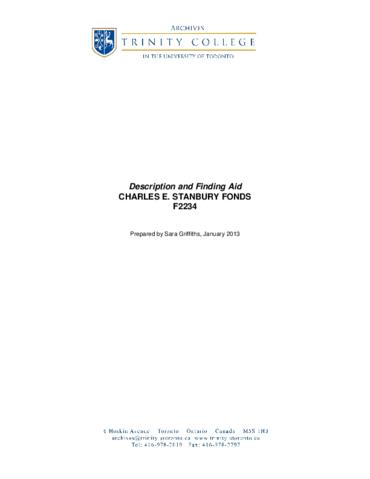 Dr. Charles Edward Stanbury, raised and educated in Toronto, was a practicing physician in Chicago, Illinois during the later part of his life. He was born in 1863 in Cornwall, England, son of Henry Stanbury and Susanne Free, who settled in the town of Yorkville. In 1881 Stanbury was living in the St. James Ward area of Toronto and in 1891 was employed as a stenographer. He graduated from Trinity College Medical School in 1897, at the age of 34. About 1904 Charles left Toronto. According to Ellis Island Passenger arrival lists, Dr. Stanbury arrived in the United States from Vera Cruz, Mexico in 1904. He subsequently settled and practiced in Chicago.

Stanbury was married to Amanda Nourse and had four children in Toronto: Charles H., Amanda Joy, Ewart D., and Bessie Bernice. Dr. Stanbury returned to the United States from Mexico accompanied by a second wife, Olive (nee Peterson). Amanda Nourse Stanbury remained in Toronto with their children and died in Toronto at age 73. Charles Stanbury died in Chicago on July 12, 1938 and is buried in the Rosehill Cemetery.

The fonds consists of documents and photographs related to Dr. Stanbury’s education at the Trinity Medical College, and his later life in Chicago.

Materials found in Olive Stanbury’s personal papers were donated to the Trinity College archives in 2001 by Joan Peterson, her niece-in-law