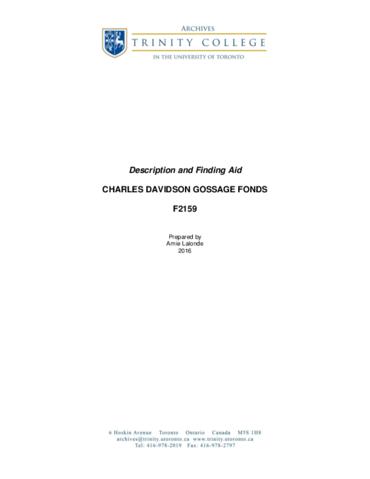 Charles Davidson Gossage was a doctor born about 1901 in Toronto, Ontario, to C.A. Gossage and Georgina Davidson. Gossage attended Jarvis Collegiate Institute before entering Trinity College in September 1917. Gossage entered medical school in 1919 and graduated from the University of Toronto with an MB in 1924. In September 1939 Gossage went into active service with the Royal Canadian Army Medical Corps and received the Order of the British Empire in December 1944. In 1950, Gossage, then director of the University Health Service announced that he would give free medical care for injuries suffered in almost any university-sponsored athletic activity. In 1971 Gossage was appointed Esquire Bedell of Trinity College.