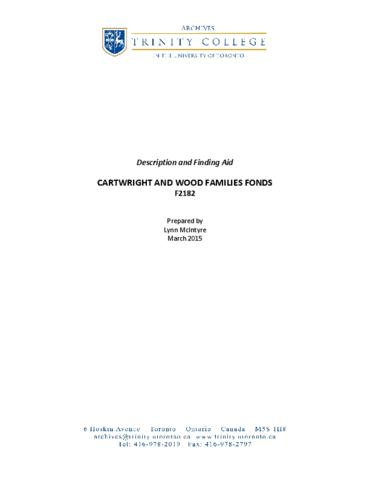 1.6 m of textual and other records

Their first child, Mabel Cartwright, was born in Kingston, Ontario, in 1869. She grew up in Toronto and later went to England where she was educated at Cheltenham Ladies’ College and Lady Margaret Hall, Oxford University. Mabel earned honours in the School of Modern History, taught in Oxford High School and, upon her return to Toronto, at Bishop Strachan School for four years. In 1903 she was appointed the second Lady Principal and in 1925 Dean of Women at St. Hilda’s residence, Trinity College. She taught English at Trinity College until her retirement in 1936. In 1925 she was granted a Doctor of Laws (honoris causa) by the University of Toronto. Through the years she held numerous posts including that of president of the Women's Auxiliary of the Diocese of Toronto.

After Mabel Cartwright’s retirement from St. Hilda’s, she lived at 32 Prince Arthur Avenue in Toronto with her invalid sister Winifred and her friend and former student, (Hilda) Fern Wood until her death in 1955. Born in Orillia, the daughter of Edward A. Wood and Sarah Weafer Wood, Fern Wood (1889-1962) was the executor of Miss Cartwright’s estate.

The papers were kept by Fern Wood, who moved to Orillia after the death of Mabel Cartwright. Her niece, Qennefer Browne, the daughter of Fern’s sister Elizabeth Wyn Wood, donated the papers to the Trinity College Archives in 1981.

Fonds consists of records relating to three generations of the Cartwright family, their relatives, friends and colleagues. Most prominent are the papers of Mabel Cartwright, which includes correspondence with her family and relatives, diaries, notebooks and photographs.

Some material is in fragile condition.

Materials arranged by the Archivist.

Some material is in fragile condition. Access to these materials is at the discretion of the archivist.

Some material is in fragile condition. Access to these materials is at the discretion of the archivist.