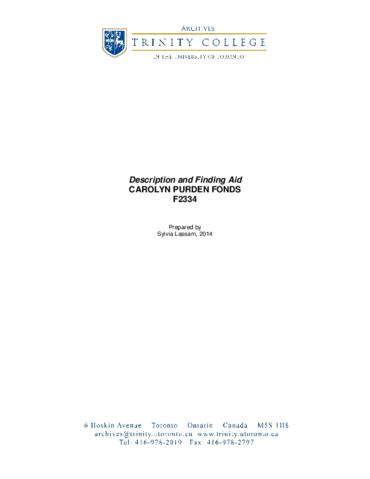 Carolyn Purden, reporter, editor and communications consultant, was born in 1941 in Solihull, Warwickshire, England to Patrick and Irene Purden and has a younger sister Christine. She came to Canada in 1952 and attended Havergal College from 1954 to 1959. She attended Trinity College, graduating in 1962. She was married to David Greenwood from 1964 to 1973, and to Rev. Tom Anthony from 1973 to 1980. She has two children, Stephen born in 1976 and Jennifer born in 1979.

As a reporter with the Canadian Churchman, Purden attended the 1968 Lambeth Conference where the ordination of women as deacons was debated. She became a strong advocate of women’s ordination issues through feature articles and editorials. Rising through the ranks at the Canadian Churchman, she covered the issue of women’s ordination as it was debated at the church’s triennial General Synod; National Executive Council (the predecessor of the Council of General Synod); and Canadian diocesan synods. She attended the Church of England General Synod, and other international Anglican gatherings, to cover their debates on the ordination of women. She interviewed archbishops, bishops and a number of women who felt their vocation as priests had been denied them. In 1974 she attended the irregular ordination of the ‘Philadelphia Eleven’ and reported first-hand on that event and its prolonged legal and theological aftermath in the Episcopal Church. She wrote on the subject of ordination to the priesthood for several overseas publications. After Canada began ordaining women as priests, she covered the issue of women in the episcopacy up to and including the ordination of Canada’s first woman bishop. Carolyn Purden is the president of Purden Communications, a corporate communications consulting service, in Toronto.

Material in this fonds was a gift from the creator.

Original order has been maintained