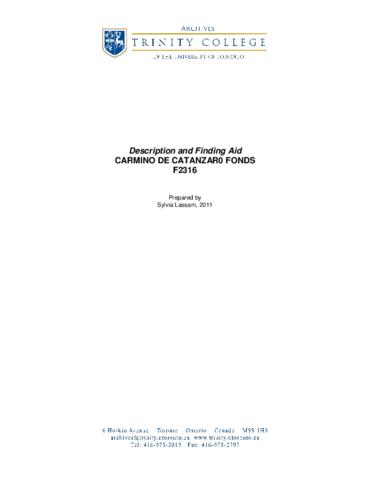 Carmino Joseph de Catanzaro, academic and cleric, was born in Brooklyn NY in 1916, the son of an Italian father, Giuseppe Catanzaro and a Danish mother, Elva Svenningsen. After the death of his father in 1929 he was educated in Copenhagen and Yarmouth, NS. He attended King's College and Dalhousie University (MA 1938), Keble College, Oxford, and Trinity College, Toronto, where he taught, first as lecturer, then as Assistant Professor, from 1945 to 1959. In 1957 he received his PhD from the University of Toronto. After some years he resigned and became associated with the Anglican Catholic Church of Canada, becoming Bishop in 1980.

Bishop de Catanzaro's interests included church music and ecumenical relations. He was a founding member of the Gregorian Association of Canada, and took part in theological conferences between Roman Catholics, Anglicans, Eastern Orthodox and Old Catholics. He was a member of the editorial board of the American Church Quarterly and produced the first English version of the Gnostic Gospel According to Philip from the Coptic.

Files have been arranged by the archivist.