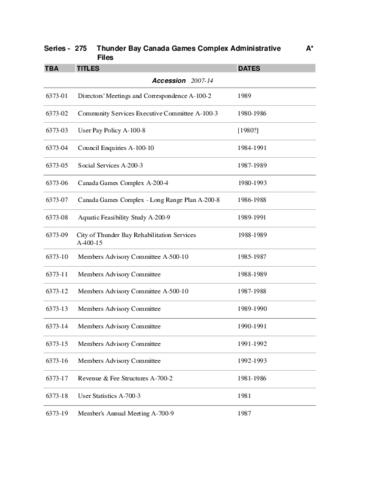 These records were scheduled as CS199 Administrative Files Manager Canada Games Complex. They were maintained at the Canada Games Complex and then transferred to the City of Thunder Bay records centre for inactive storage as per their retention schedule.

The Canada Games Complex, located at 420 Winnipeg Avenue, Thunder Bay, Ontario, was constructed as a venue for aquatic events for the 1981 Canada Summer Games. Construction began in 1979 and the Complex officially opened on July 2, 1981. The Canada Summer Games took place there August 9-22, 1981. The Complex was built to host swimming, diving, and water polo at the Summer Games, but ancillary facilities were also included in the interests of the long-term viability of the Complex as a total fitness and recreation centre facility within the community. Among its amenities are a waterslide, exercise equipment, a running track, weight room, facilities for racquet sports, a restaurant, and a pro shop. In addition, the Complex offers a wide range of fitness and recreation programs and courses.

The records in Acc. # 2007-14 consisted of several transfers of records. Once non-archival and duplicate material was culled, the files were organized according to the file numbers that appeared on some of the files