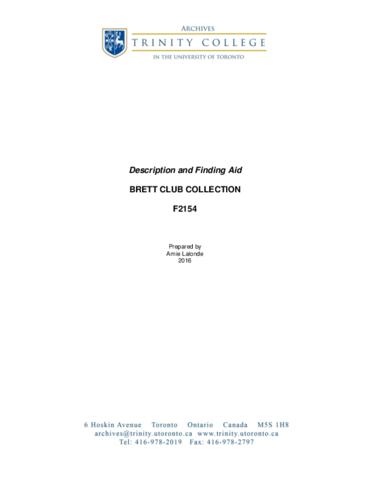 A Trinity College Arts and Letters club was formed in the autumn of 1946. It was the umbrella organization which, de facto, superintended the co-educational recreational activities of several of the college's academic departments. Academic staff and students participated in meetings held by various groups loosely affiliated with a specific faculty. These were meetings of anyone in the community who expressed an interest in fine art, music, literature or philosophy as well as other arts endeavours. The meetings of the philosophy discussion group were spearheaded by Dr George Edison and were, from the first, very popular. It is perhaps due to the unexpected popularity of the group that Edison encouraged students to form a philosophical society.

In September 1946 they did so, naming their society after George Sidney Brett, head of the Department of Philosophy at the University of Toronto from 1919 until his death and a professor active in the Trinity community. He had died suddenly at his home on 27 October 1944 and was remembered fondly by many students still attending the college.

Once formed, the Brett Club seemed to fall almost immediately into a slow decline, perhaps exacerbated by the emphasis that the club was "restricted to those students genuinely interested in philosophy" (Review, August 1947). It failed to form a constitution in the 1940s and was quickly regarded by the college community at large as "a certain species of cult to which new participants are admitted only upon invitation" (Review, summer 1949). The Arts and Letters Club was still functioning and included philosophical discussions which were more accessible.

However, the Brett Club was revitalized in the 1967-1968 academic session, apparently through the efforts of its new president, Derek Allen (BA 1968, Head of Arts 1967-1968 and Rhodes Scholar). It fashioned itself in a variety of forms over the intervening years, holding both open and closed meetings. The Brett Club convened any number of times a year, invariably to discuss with an academic a sophisticated philosophical question or concept.

Original order has been preserved