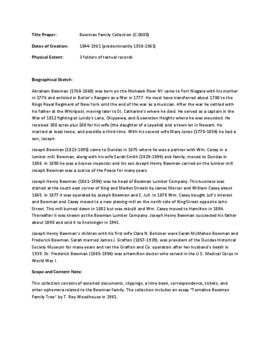 Joseph Henry Bowman (1861-1954), son of Joseph Bowman and Sarah Smith, was the head of Bowman Lumber Company. The business first started in 1865 at the southeast corner of King and Market Street and was owned by James Mercer and William Casey. In 1877 the mill was operated by Joseph Bowman and S. Jull. In 1878 Wm. Casey eventually bought Jull’s interest and Bowman and Casey moved to a new planing mill on the north side of King Street opposite John Street. This mill burned down in 1882 but was rebuilt and Wm. Casey moved to Hamilton in 1884. Thereafter it was known as the Bowman Lumber Company. Joseph Henry Bowman succeeded his father about 1890 and sold it to Snetsinger in 1941.

Dr. Frederick Bowman (1885-1954), son of Joseph Henry Bowman and Clara N. Behimer, was a Hamilton doctor who served in the U.S. Medical Corps in World War I.

Abraham Bowman (1768-1860) was born on the Mohawk River NY. He came to Fort Niagara with his mother in 1776 and enlisted in Butler’s Rangers as a fifer in 1777. He must have transferred in 1780 to the Kings Royal Regiment of New York until the end of the war as a musician. After the war, Abraham settled with his father at the Whirlpool, moving later to St. Catharine’s where he died. He served as a captain in the War of 1812 fighting at Lundy’s Lane, Chippewa, and Queenston Heights where he was wounded. He received 300 acres plus 200 for his wife (the daughter of a Loyalist) and a town lot in Newark. He married at least twice, and possibly a third time. With his second wife Mary Jones (1770-1854) he had a son, Joseph.

This collection consists of assorted documents, clippings, a time book, correspondence, tickets, and other ephemera related to the Bowman family. The collection includes an essay “Tentative Bowman Family Tree” by T. Roy Woodhouse in 1961.

The immediate source of acquisition is unknown.