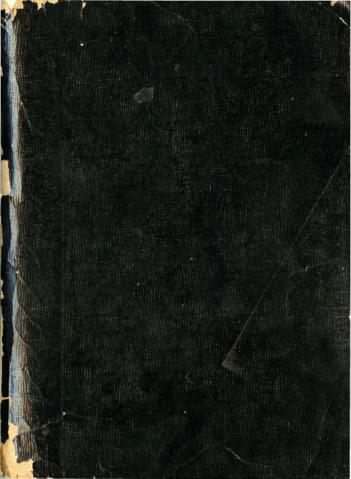 Item is volume two of a handwritten Canadian History Outline lesson plan. Subjects included in the lesson plan are: the United Empire Loyalists, Feudalism, the Constitutional Act, the War of 1812, the Fur Trade, pioneers in Upper Canada, Responsible Government in British North America (Canada pre-1867), The Rebellion of 1837-1838, the Canadian Pacific Railway (CPR), Confederation, Louis Riel and the North-West Rebellion, Canada in the Boer War (South African War), The League of Nations, the Klondike Gold Rush, aviation during The Great War and the role of the government in Canada, including electoral districts, sources of revenue and available social services. Tucked within the notebook are handwritten and typewritten notes on historical people and events, maps, a pamphlet titled "The Fathers of Confederation" that was issued by the Ontario Department of Education in September 1927, eighteen 'Canadianecdote' articles clipped out of Maclean's Magazine ("The Fiddler Went to War," "Frontenac's Unwanted Heart," "The Tycoon in Caulk Boots," "They Took a Train for Taxes," "John A. and the Jester," "The Tale of Old Wives," "The Vindication of Suzanne Pas-de-Nom," "Finnan Fought a Buffalo," "A Coin that's Worth a Fortune," "The Last Shots of War," "The West's Jesting Judge," "And He Owned B.C.!," "A Favor from Mavor," "He Traded Canada for a Dowry," "He Duped the Duke," "The Sacrifice of Malobiannah," "The Lifesaving Doves" and "The Raid on 'Fort Blunder'"), a memorandum dated June 1933 regarding higher average marks received by students at Capreol Public School in Capreol, Ontario on their high school entrance exams versus their final exams (which included a suggestion that the final exams should be made less difficult and be marked more carefully to ensure that the exams were of value to the students and school officials), a typed article entitled "The Legend of the Crooked Tree" which was based on (predominately verbatim) the published article “Crooked Tree of Ekfrid Casts Shadow Over Site of Canada’s Betrayal” (originally published in The London Free Press), a typed article entitled "Stoney Creek" which was based on (predominately verbatim) the published article “Victory of Stoney Creek,” a handwritten list of the Cabinet members in the 1934 Ontario Government and the 1935 Dominion Government, a handwritten list of six items titled, “The duties of a Citizen,” and newspaper clippings.

For copyright reasons, newspaper clippings have been removed from the digital copy of the item.