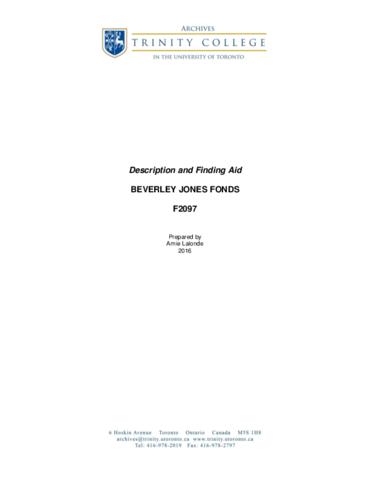 Beverley Jones was a lawyer who was born 11 June 1839 in Brockville, Ontario, one of three children of Sidney Jones and Susan Ford. Jones was educated at Brockville Grammar School and Upper Canada College before graduating with a BA from Trinity College in 1860 and an MA from Trinity College in 1877. He was called to the bar (Osgoode) in 1864 and began working in the office of his cousins, Jones Brothers. In 1961 he enlisted in the volunteers at Brockville during the Trent Excitement and served in the Queen’s Own Rifles during the Fenian Raid of 1866.

In 1864 Jones joined the Canada Permanent Mortgage Co. as a solicitor and remained in an advisory role there until his death. In 1873 Jones became the bursar of Bishop Strachan School, a private school for girls in Toronto. Jones served as a delegate to the diocesan synod for nearly 50 years as a representative of the congregation of St. George’s Church, served as secretary of the Canada Law Amendment Association, and was one of the founders of the Industrial Schools Association, serving as treasurer for 30 years. Jones was committed to providing homes for children and established industrial schools for boys and girls, founding the Victoria and Alexandra schools in Mimico and East Toronto. In Jones 1888 drafted the bill known as the Juvenile Offenders Act which provided for a separate trial for juveniles and allowed children under age fourteen to be committed to certain institutions or charitable societies to be taken care of and educated.