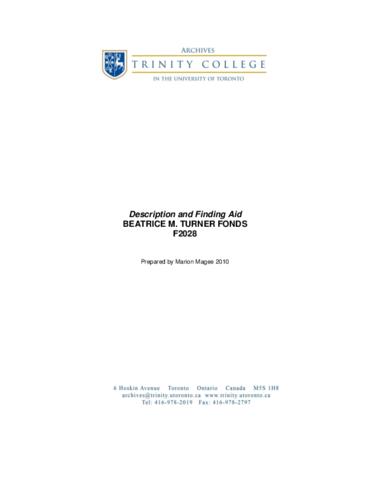 1.35 m of textual records and other material

Beatrice Mary Scott Turner, educator and volunteer, was born about 1899 in Millbrook, Ontario. She was the daughter of Henry Allen Turner, a graduate of Trinity Medical College, and Alice Jane Scott. Turner received her early education in Millbrook and entered Trinity College in 1915. . After graduating with a B.A. in 1919 she lived in Hamilton and taught at Kingsthorpe, a private girls' school. She then returned to Millbrook to care for her mother and while there took an active interest in the community, especially her church and the local branch of the Red Cross. She eventually settled in Toronto and was active in the St. Hilda's College Alumnae Association. She was Year Group Convenor for the years prior to 1922 and kept the Alumnae well informed of College activities either personally or by correspondence as well as keeping Convocation up to date with news of alumnae. In 1975 she was elected to the Corporation of Trinity College. She was involved in the Altar Guild and the Women's Auxiliary at the Church of St. Alban the Martyr and worked closely with St. Andrew's Japanese Congregation. She was made a life member of the Women's Auxiliary of the Diocese of Toronto and was an active member of the Diocesan Chancel Guild. At the time of her death she was a member of Christ Church, Deer Park. She died at Toronto on 12 August 1978.

The material in series 2 and 3 has been arranged by the archivist according to topic and date (where available).