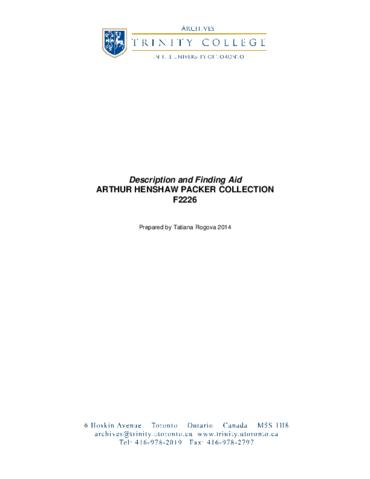 Arthur Henshaw Packer, sculptor, artist, designer, carver, was born on 11 May 1888 at Trowbridge, Wiltshire, England. He studied art and architecture in Bath, England and as a part of his training, did a number of carvings on public buildings around the Bath area. In 1910, after the completion of his course study, he immigrated to Winnipeg, Manitoba, joining his family who had arrived in Canada in 1907.

Upon arrival, he worked at the DeKew Company, which supplied ornamental stone and mouldings. Packer also worked on a number of small commissions, such as the carvings on Gaiety Theatre [1912?] and Marlborough Hotel [1913?] in Winnipeg. In 1913, he married his fiancée Kate Edith Cox (1886-1943) shortly after her emigration from Bournemouth, England. Packer and his wife had one daughter, June K. Ridley (1914-2001).

Packer received the commission to carve the reliefs on the tympanum of the Winnipeg Law Court around 1914. After 1914, he became a homesteader, owning a farm on the Peguis First Nations Reserve with his extended family. In 1917, he began working as a school teacher on the reserve. Around 1935, he moved with his wife, daughter and son-in-law to Toronto, where he once again took up sculpting and carving. He designed and constructed a series of English Cottage style homes in the Kingsway area in west Toronto with his son-in-law. In 1941 he accepted the commission from Trinity College to carve the portraits of King George VI, Queen Elizabeth, Archbishop Owen and the Provost Cosgrave in the Trinity Quadrangle. He may have worked on the bas reliefs and the coat of arms on the former Postal Building at 40 Bay St. (now the Air Canada Center) around 1938 and he contributed to the carving of the QEW Monument in 1939. He is also thought to have carved the Canadian Coat of Arms on the Rainbow Bridge at Niagara Falls in 1942.

During the war period he worked for the DeHavilland Aircraft Company, modelling parts of planes. He continued to work on private commissions after 1945. Packer died in 1953 at his home in Toronto.

[Source]: Most of the biographical information on A.H. Packer comes from a biography written by his daughter, June K. Ridley, Artist Among the Wolves , published in 2005

Photographs of Packer working on the sculptures at Trinity College were given to the archives by June K. Ridley in 1995.