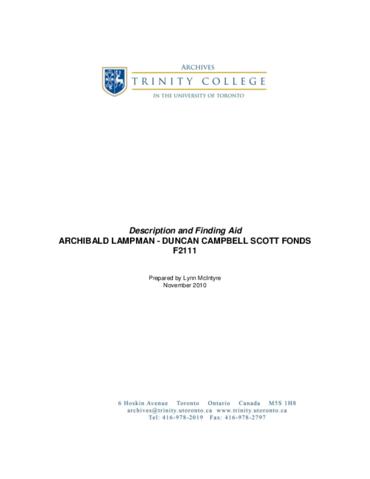 He was born in Ottawa, Canada West. He was educated in various schools in Ontario and Quebec and at Stanstead College, Quebec. He became a clerk in the department of Indian Affairs in Ottawa at the age of seventeen. He remained in the department and in 1923 became Deputy Superintendent. In 1923 he was the Deputy Superintendent General for the federal government. His responsibilities included representing the Federal Government in intergovernmental negotiations with the aboriginal peoples in landholding agreements and establishing treaty settlements. As Commissioner in the first of two Commissioners' visit in 1905- 6 (the other in 1929-30) to Northern Ontario, Scott was instrumental in submitting Treaty No.9 to the Governor General for ratification in January, 1907.

Scott was also an amateur photographer and during the Commissioners' visit in 1905- 6 to the James Bay area he photographed the native population and scenery.

He was an author of poetry and fiction, and published many volumes of each. Throughout his career in Ottawa he actively corresponded with Melvin O. Hammond in Toronto, while the latter was literary editor of the Globe and contributed many essays to the newspaper.

In 1899, Scott was elected a fellow of the Royal Society of Canada to which in 1921 -1922 he served as its president. In the same year, the University of Toronto conferred on him the degree of D.Litt.

Archibald Lampman, poet and civil servant, was born on 17 November 1861 in Morpeth, County Kent, Ontario, the son of the Reverend Archibald Lampman and Susannah Charlotte Gesner. He attended a school at Gore's Landing, Ontario (run by Frederick William Barron), Cobourg Collegiate Institute, and Trinity College School, Port Hope, before entering the University of Trinity College, Toronto. He was Wellington Scholar, wrote for the College journal <i>Rouge et Noir </i>(predecessor of <i>Trinity University Review</i>) and was editor in his final year, 1881-82. Lampman was a member of the Trinity College Literary Institute and was Scribe of the two books of Episkopon (the reading of the Episkopon volumes was an annual ritual of the college) in 1881 and 1882. He also contributed to "The Week." He graduated with a BA in 1882. Lampman tried teaching but soon left that profession and entered the Canadian civil service in January of 1883 as a clerk in the Post Office Department.

In 1887 Lampman’s verse began to appear in magazines such as <i>Scribner's, Harper's, Arcadia, Canadian Illustrated News, Atlantic Monthly,</i> and <i>Century</i>. In 1888 he published his first volume, <i>Among the Millet and Other Poems</i>. From February 1892 to July 1893, Lampman, William Wilfred Campbell, and Duncan Campbell Scott wrote a Saturday column for the Toronto Globe titled "At the Mermaid Inn." He was elected a Fellow of the Royal Society of Canada in 1895, was a member of the Social Science Club in Ottawa and a member of the Fabian Society. He published a second volume, <i>Lyrics of Earth</i> (printed in 1895 and released in 1896) and a third, <i>Alcyone, and other Poems</i>, was in the press at the time of his death. It was held back by Duncan Campbell Scott in favour of a comprehensive memorial volume (1900).

Lampman married Maud Emma Playter on 3 September 1887, in Ottawa, and they had three children: Natalie Charlotte, Arnold Gesner, and Archibald Otto. He died on 10 February 1899 in Ottawa.

Fonds contains autograph poems by both Lampman and Scott, a bound volume with two Lampman poems presented to the College by Scott, various poems by Lampman and Scott printed on cards or in booklets and sent as Christmas cards along with Christmas greetings to "Shortt” [the Reverend Charles Harper Shortt who was a fellow student of Lampman’s at Trinity].

The material in the bound volume was given to the College in 1945 by Duncan Campbell Scott. There is no firm evidence of when or how the other material came into the archives.

The material in file 1-2 has been arranged by the archivist. The material is fragile and photocopies of this material as well as of Lampman's writings in <i>Rouge et Noir</i> and the <i>Trinity University Review</i> are available for use by researchers: see the files in Box 1.