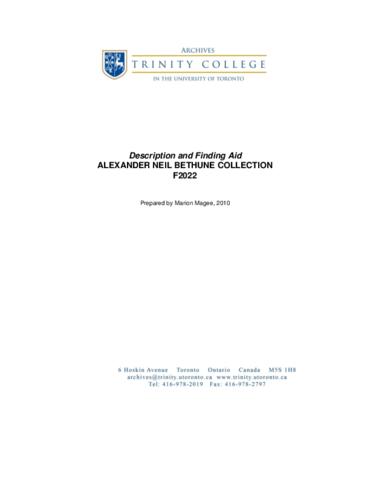 Alexander Neil Bethune was born on 28 August 1800 at Williamstown, Charlottenburg Township, Upper Canada, and died on 3 February 1879 at Toronto, Ontario. He married Jane Eliza Crooks and had ten children.

From 1810 to 1812 Alexander Neil was a student at the grammar school run by the Reverend John Strachan at Cornwall, Upper Canada. His movements from 1812 to 1819 are not known for certain, but in the autumn of 1819 he wrote from Montreal that he had determined to go to York “to place himself under the care and direction of Dr. Strachan.” From 1819 to 1823 Bethune remained at York as a student of divinity supported by the Society for the Propagation of the Gospel. He was made a deacon by Bishop Jacob Mountain on 24 August 1823 and priest on 26 September 1824. He had charge of the parish of The Forty (Grimsby)and an out-station at Twelve Mile Creek (St. Catharines). In 1827 Bethune became the incumbent of the parish of Cobourg; he was later its rector and served there until 1867.

While at Cobourg, Bethune became first editor of The Church, a weekly newspaper that began publication on 6 May 1837. The newspaper‟s founding came from the need to rally Church support for its stand on the clergy reserves. Bethune had made a careful study of the whole question, and Strachan, chairman of the newspaper‟s committee, found in Bethune a man whom he could trust and in whom he could confide. Indeed Strachan directed much of the editorial policy.

When the diocese of Toronto was carved out of that of Quebec in 1839, Strachan became its first bishop and he appointed Bethune as one of his chaplains. In October 1841 Strachan asked his chaplains (Bethune, Henry James Grasett, and Henry Scadding) to draw up a plan for training divinity students pending the establishment of a regular college. The plan was submitted, and on 27 November Strachan announced the appointment of Bethune, though he did not have a degree, as professor of theology. The Diocesan Theological Institution opened in Cobourg in January 1842 with 15 students but was attended by indifferent success and considerable controversy and ten years later was merged with the University of Trinity College.

In 1845 Strachan appointed Bethune his ecclesiastical commissary for the archdeaconry of York with the title of “the Reverend Official.” In 1847, upon Strachan‟s resignation, Bethune became archdeacon of York. He gave up the editorship of The Church while remaining principal of the college. As Strachan‟s chief administrative assistant, he made regular visitations of the parishes, checking church buildings and rectories, reviewing parish registers, advising on pastoral problems, and making reports to the bishop.

Strachan prevailed upon King‟s College, Aberdeen, to confer upon his archdeacon the degree of doctor of divinity in 1847; ten years later Trinity College conferred upon him the honorary degree of Doctor of Canon Law. In the spring of 1852 Bethune went to England at Strachan‟s bidding to raise financial support for Trinity College. Bethune was also his church‟s spokesman in England during the final battle over the clergy reserves. He met with limited success in both tasks. When the diocese of Toronto was subdivided in 1857 and again in 1862, Bethune lost both episcopal elections to local canadidates in part because opposition in the Church to Strachan spilled over onto Bethune. However in 1866 Strachan requested a coadjutor and on 21 September Bethune was elected (after the withdrawal of George Whitaker, the provost of Trinity College). Bethune took the title of bishop of Niagara and was consecrated by Strachan on 25 January 1867. Later that year Bethune represented the diocese of Toronto in place of the failing Strachan at the first Lambeth Conference. He returned to Toronto just before Strachan‟s funeral on 5 November. Bethune succeeded his mentor on 1 November 1867, resigning both the rectory of Cobourg and the archdeaconry of York. He continued as bishop of Toronto until his death in 1879 but he was never able to escape the opposition which Strachan‟s methods and policies had stirred up and his tenure was dogged with controversy between the „high‟ church and „low‟ church factions within the diocese.

Not known for accession 985-0083; accession 985-0066 was received from Beatrice M. Bethune (a granddaughter of A.N. Bethune), date unknown; accession 006-0017 deaccessioned from Archives of Ontario and given to Trinity Archives in 2006.

The collection consists primarily of correspondence between John Strachan and Bethune. Also included are published inserts, memoranda, sermons and copies of letters.

The original arrangement of four packets (with their inserts) has been maintained. The two miscellaneous documents are in separate files.

Other records relating to Bethune exist in the Anglican Church of Canada, Diocese of Toronto, and at the Archives of Ontario.