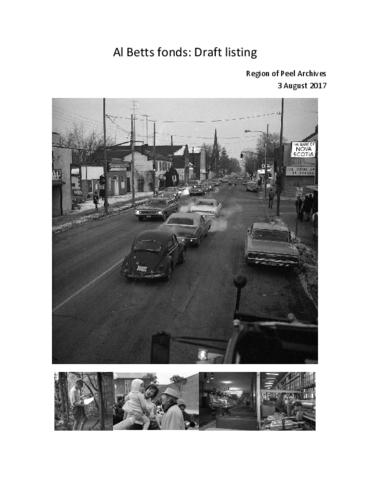 Al was born in the City of Toronto on February 3rd, 1924 to Fred and Violet Betts. He was named Alfred like his dad; however, to avoid confusion he was called Al. He spent his formative years growing up in the north part of the city.

Al enlisted with the Royal Canadian Air Force in 1943. He trained in Medicine Hat, AB, Chatham, NB, and Charlottetown, PEI as a Navigation-Bombardier on the Lancaster bombers. During the Second World War he was stationed in Bournemouth in the south of England.

Al’s passion was photography. Family legend has it he became interested in photography when he scooped up an old Kodak “Brownie” camera that had been tossed away. Always the curious individual he took it apart, repaired it, and started experimenting with photography.

After the Second World War he began working at Toronto Western Hospital where he met the love of his life, Helen Colville. They wed in 1950 and lived in Toronto before leaving the city in 1956 for Streetsville, then in Toronto Township (now Mississauga). By the time they moved to Streetsville, their first two children, Doug and Marylyn, had been born.

In 1958 a second son, Brian, was born and Al was working at A.V. Roe in Malton. Here he had the privilege of working on the Avro Arrow project in the Photography Department. He took several of the iconic pictures of the Avro Arrow in production and in flight. This job was short-lived, however, with the cancellation of the Avro project in 1959.

Al started A. Betts Photography in Streetsville around 1965. During this time Al and Helen completed their family with the addition of Stephen and Cynthia. The entire family settled into the three bedroom bungalow on Vista Boulevard in Streetsville. He gave back to the town by initiating the Bread and Honey Festival, helping with the Boy Scouts, and being the official photographer for the local Streetsville newspaper. He was active as a professional photographer to ca. 1983.

As the children grew older, Al had more time to travel the world with Helen (and sometimes with their children in tow). Their travels took them throughout North America, Europe, as well as Central America and the Caribbean.

Al passed away peacefully, with family by his side, on Friday, January 20th, 2017, at the Credit Valley Hospital in Mississauga.

Envelopes are sorted based largely on Mr. Betts' own control numbers.